Freshwater benthic invertebrates are animals without backbones that live on the stream bottom and include crustaceans such as crayfish, molluscs and immature forms of aquatic insects. Benthos represent an extremely diverse group of aquatic animals and exhibit wide ranges of responses to stressors such as organic pollutants, sediments and toxicants, which allows scientists to use them as bioindicators.  As part of the Ontario Benthic Biomonitoring Network (OBBN), the RVCA has been collecting benthic invertebrates at the Bleeks Road site on Hobbs Drain since 2004. Monitoring data is analyzed for each sample site and the results are presented using the Family Biotic Index, Family Richness and percent Ephemeroptera, Plecoptera and Trichoptera.

The Hilsenhoff Family Biotic Index (FBI) is an indicator of organic and nutrient pollution and provides an estimate of water quality conditions for each site using established pollution tolerance values for benthic invertebrates. FBI results for the Hobbs Drain catchment sample location at Bleeks Road are separated by reporting period 2004 to 2009 and 2010 to 2015.  A wide ranging “Excellent” to “Poor” water quality conditions were observed at the Hobbs Drain sample location for the period from 2004 to 2015 (Figure 8) using a grading scheme developed by Conservation Authorities in Ontario for benthic invertebrates. 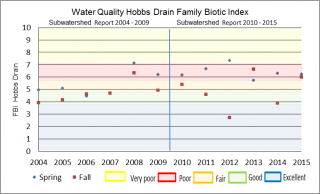 Family Richness measures the health of the community through its diversity and increases with increasing habitat diversity suitability and healthy water quality conditions. Family Richness is equivalent to the total number of benthic invertebrate families found within a sample.   The Hobbs Drain site is reported to have “Fair” to “Good” family richness (Figure 9). 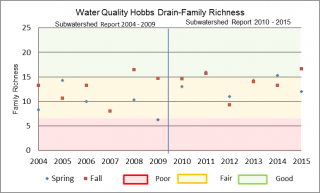 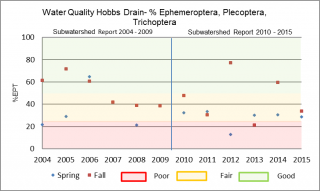 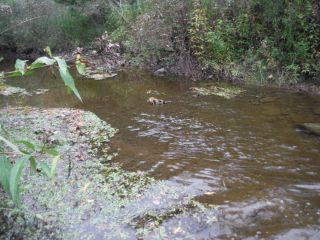 Overall the Hobbs Drain sample location aquatic habitat conditions from a benthic invertebrate perspective is considered “Good” from 2004 to 2015 as the samples are dominated by species that are moderately sensitive and sensitive to high organic pollution levels.

Many factors can influence fluctuations in stream temperature, including springs, tributaries, precipitation runoff, discharge pipes and stream shading from riparian vegetation. Water temperature is used along with the maximum air temperature (using the Stoneman and Jones method) to classify a watercourse as either warm water, cool water or cold water. Figure 11 shows where the thermal sampling sites were located along Hobbs Drain.  Analysis of the data collected indicates that Hobbs Drain is classified as a cool water system with cool to warm water reaches (Figure 12). 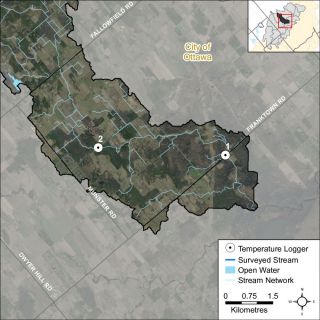 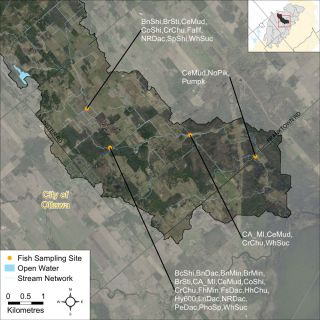 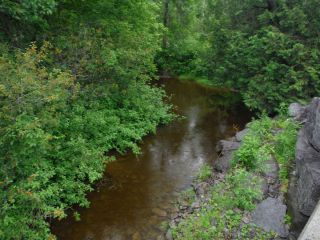 The RVCA Stream Characterization program assessed Headwater Drainage Features for the Jock River subwatershed in 2015. This protocol measures zero, first and second order headwater drainage features (HDF).  It is a rapid assessment method characterizing the amount of water, sediment transport, and storage capacity within headwater drainage features (HDF). RVCA is working with other Conservation Authorities and the Ministry of Natural Resources and Forestry to implement the protocol with the goal of providing standard datasets to support science development and monitoring of headwater drainage features.  An HDF is a depression in the land that conveys surface flow. Additionally, this module provides a means of characterizing the connectivity, form and unique features associated with each HDF (OSAP Protocol, 2013). In 2015 the program sampled 6 sites at road crossings in the Hobbs Drain catchment area (Figure 14). 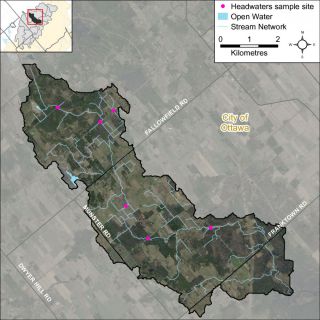 The headwater sampling protocol assesses the feature type in order to understand the function of each feature.  The evaluation includes the following classifications: defined natural channel, channelized or constrained, multi-thread, no defined feature, tiled, wetland, swale, roadside ditch and pond outlet.  By assessing the values associated with the headwater drainage features in the catchment area we can understand the ecosystem services that they provide to the watershed in the form of hydrology, sediment transport, and aquatic and terrestrial functions. Five features were classified as having been channelized and one feature was identified as natural. Figure 15 shows the feature type of the primary feature at the sampling locations. 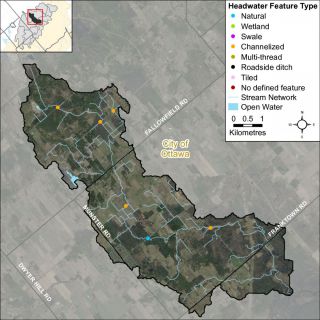 The observed flow condition within headwater drainage features can be highly variable depending on timing relative to the spring freshet, recent rainfall, soil moisture, etc.  Flow conditions are assessed in the spring and in the summer to determine if features are perennial and flow year round, if they are intermittent and dry up during the summer months or if they are ephemeral systems that do not flow regularly and generally respond to specific rainstorm events or snowmelt.  Flow conditions in headwater systems can change from year to year depending on local precipitation patterns. Figure 16 shows the observed flow conditions at the sampling locations in the Hobbs Drain catchment in 2015. 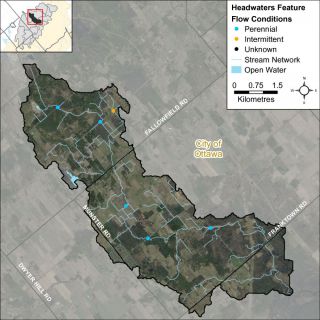 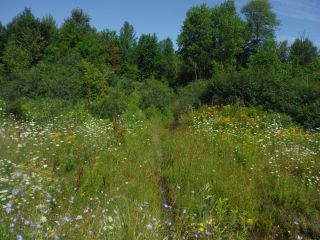 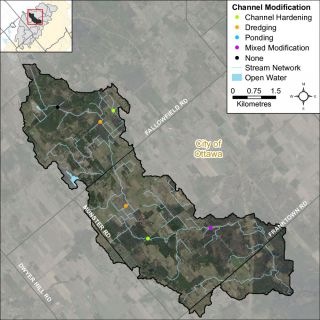 Headwater feature vegetation evaluates the type of vegetation that is found within the drainage feature.  The type of vegetated within the channel influences the aquatic and terrestrial ecosystem values that the feature provides.  For some types of headwater features the vegetation within the feature plays a very important role in flow and sediment movement and provides fish and wildlife habitat.  The following classifications are evaluated no vegetation, lawn, wetland, meadow, scrubland and forest.  The features assessed in the Hobbs Drain catchment were classified being dominated by wetland and meadow vegetation.  Figure 18 depicts the dominant vegetation observed at the sampled headwater sites in the Hobbs Drain catchment. 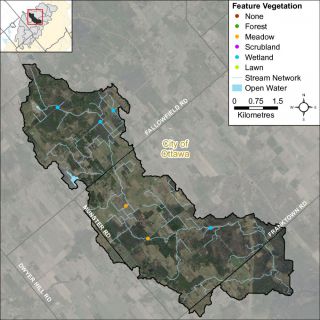 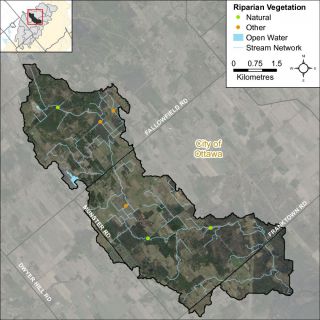 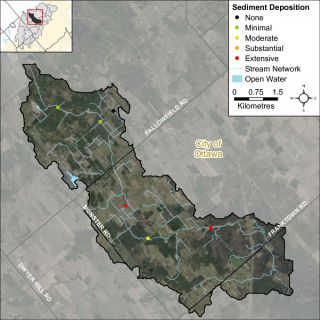 Feature roughness will provide a measure of the amount of materials within the bankfull channel that could slow down the velocity of water flowing within the headwater feature (OSAP, 2013).  Materials on the channel bottom that provide roughness include vegetation, woody debris and boulders/cobble substrates.  Roughness can provide benefits in mitigating downstream erosion on the headwater drainage feature and the receiving watercourse by reducing velocities.  Roughness also provides important habitat conditions for aquatic organisms. The sample locations in the Hobbs Drain catchment area ranged from minimal to high roughness conditions.  Figure 21 shows the feature roughness conditions at the sampling locations in the Hobbs Drain catchment. 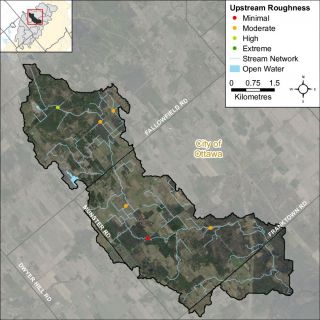