Figure 12 shows the extent of the naturally vegetated riparian zone along a 30 metre wide strip of shoreline of the Rideau River and its tributaries. This information is derived from a dataset developed by the RVCA’s Land Cover Classification Program through heads-up digitization of 20cm DRAPE ortho-imagery at a 1:4000 scale, which details the catchment landscape using 10 land cover classes. 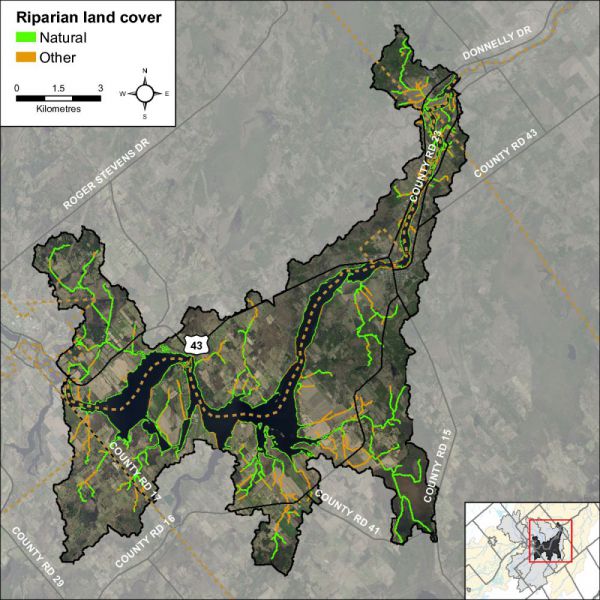 Table 9 Riparian land cover (2008 vs. 2014) in the Rideau-Merrickville catchment

Groundwater discharge areas can influence stream temperature, contribute nutrients, and provide important stream habitat for fish and other biota. During stream surveys, indicators of groundwater discharge are noted when observed. Indicators include: springs/seeps, watercress, iron staining, significant temperature change and rainbow mineral film. Figure 13 shows areas where one or more of the above groundwater indicators were observed during the headwater drainage feature assessments. 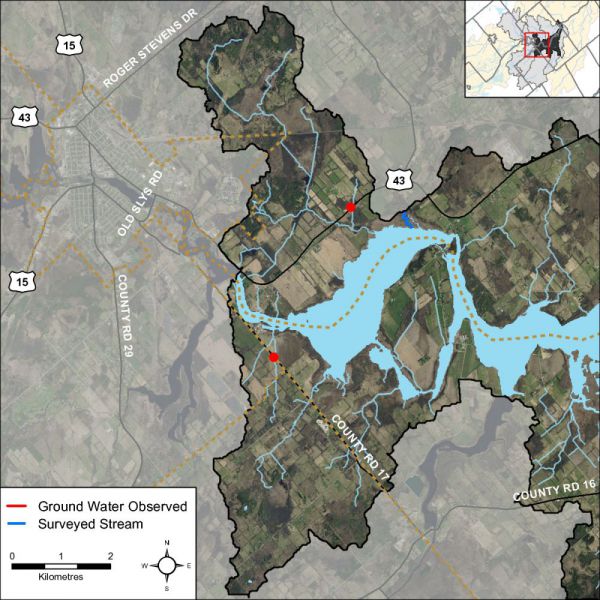 The RVCA Stream Characterization program assessed Headwater Drainage Features for the Middle Rosedale subwatershed in 2014. This protocol measures zero, first and second order headwater drainage features (HDF).  It is a rapid assessment method characterizing the amount of water, sediment transport, and storage capacity within headwater drainage features (HDF). RVCA is working with other Conservation Authorities and the Ministry of Natural Resources and Forestry to implement the protocol with the goal of providing standard datasets to support science development and monitoring of headwater drainage features.  An HDF is a depression in the land that conveys surface flow. Additionally, this module provides a means of characterizing the connectivity, form and unique features associated with each HDF (OSAP Protocol, 2013). In 2014 the program sampled 23 sites at road crossings in the Rideau – Merrickville catchment area (Figure 14). 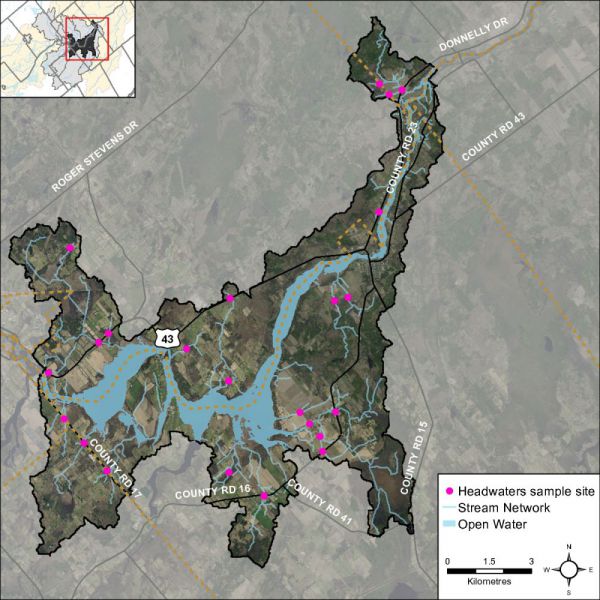 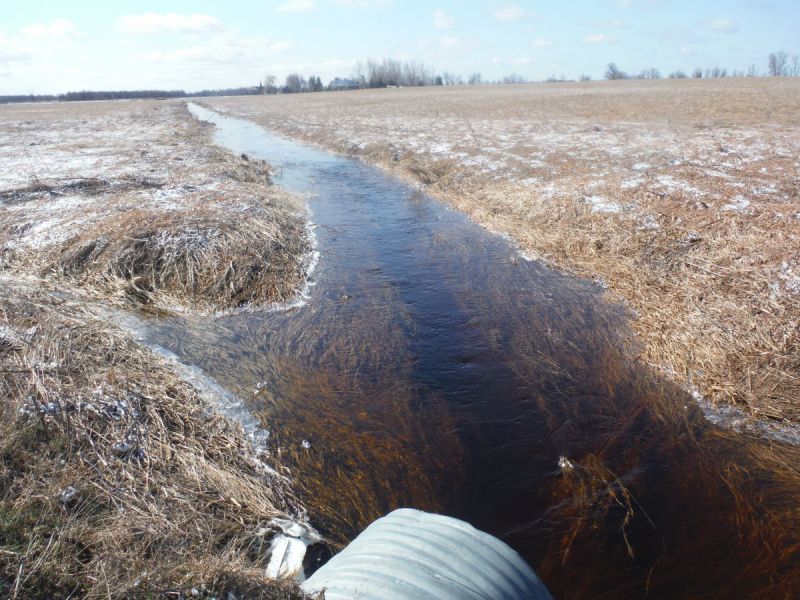 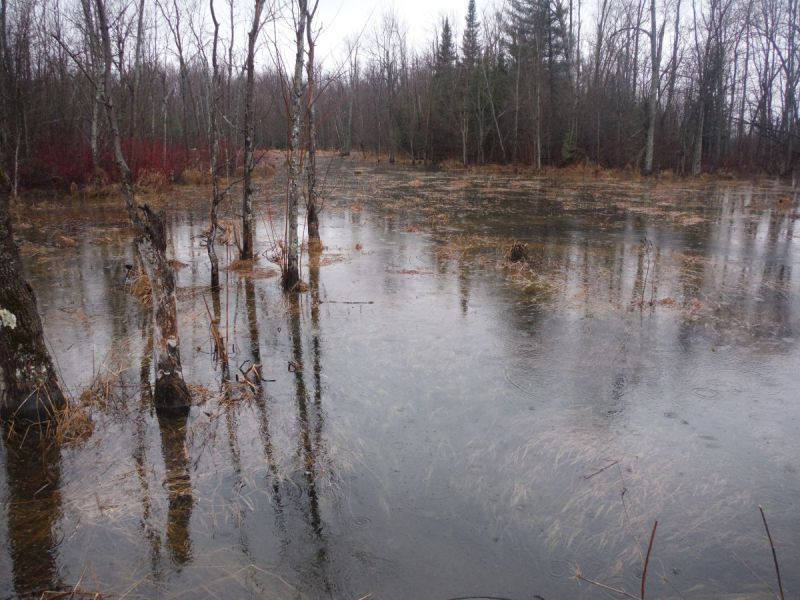 The headwater sampling protocol assesses the feature type in order to understand the function of each feature.  The evaluation includes the following classifications: defined natural channel, channelized or constrained, multi-thread, no defined feature, tiled, wetland, swale, roadside ditch and pond outlet.  By assessing the values associated with the headwater drainage features in the catchment area we can understand the ecosystem services that they provide to the watershed in the form of hydrology, sediment transport, and aquatic and terrestrial functions.  The Rideau-Merrickville catchment headwater drainage features had a wide variety of feature types including wetland, natural channel, channelized, roadside and swale.  Figure 15 shows the feature type of the primary feature at the sampling locations. 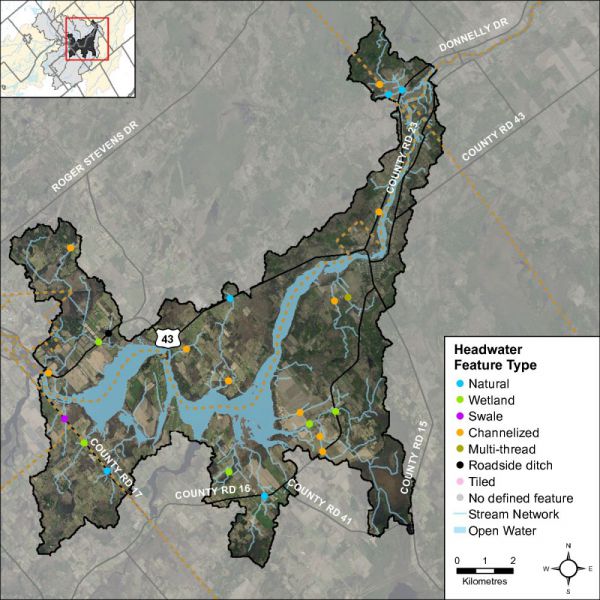 The observed flow condition within headwater drainage features can be highly variable depending on timing relative to the spring freshet, recent rainfall, soil moisture, etc.  Flow conditions are assessed in the spring and in the summer to determine if features are perennial and flow year round, if they are intermittent and dry up during the summer months or if they are ephemeral systems that do not flow regularly and generally respond to specific rainstorm events or snowmelt.  Flow conditions in headwater systems can change from year to year depending on local precipitation patterns. Many of the features were not assessed in the summer due to timing constraints which resulted in the feature flow types being classified as unknown. Figure 16 shows the observed flow conditions at the sampling locations in the Rideau-Merrickville catchment. 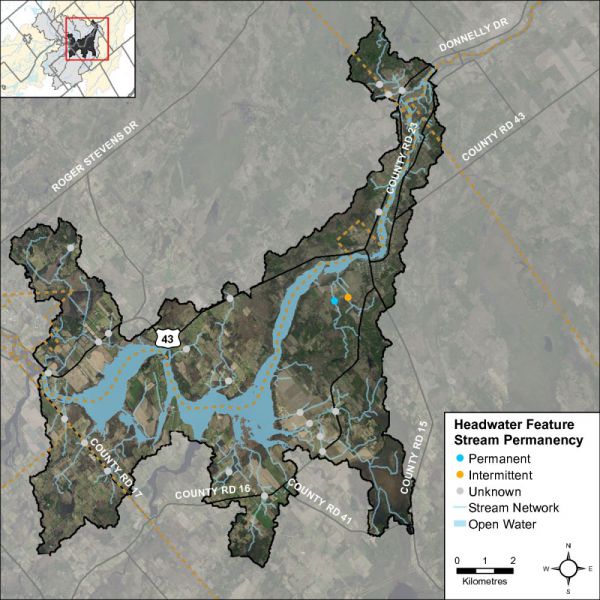 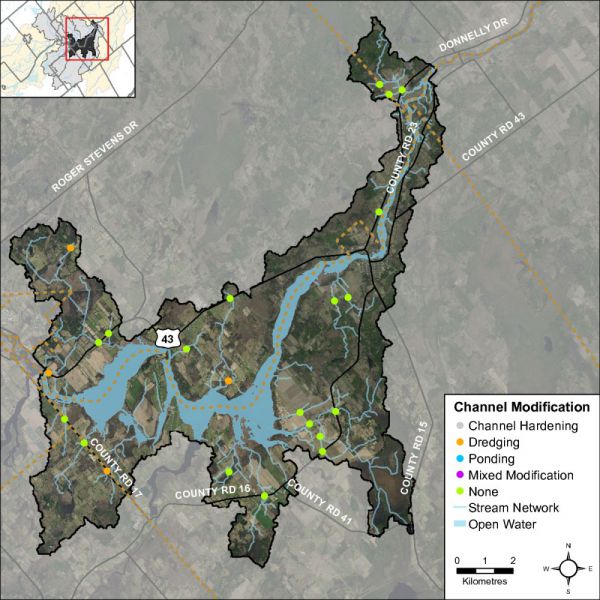 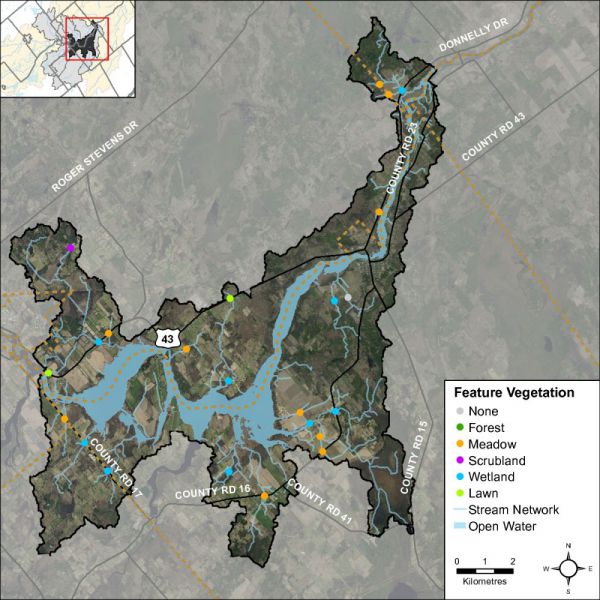 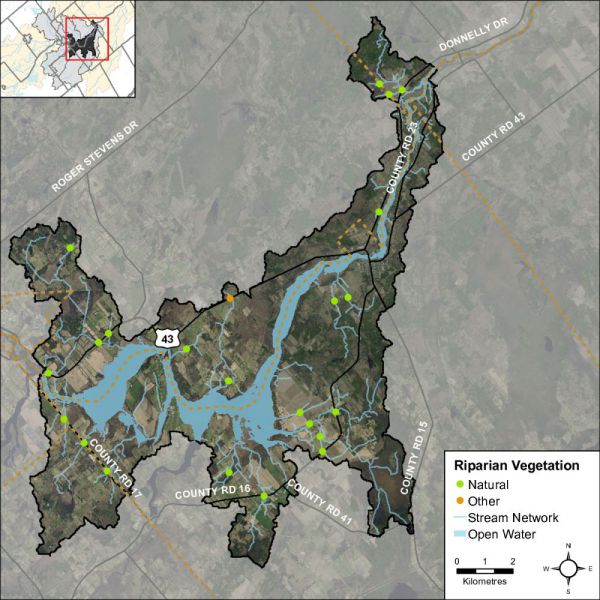 Assessing the amount of recent sediment deposited in a channel provides an index of the degree to which the feature could be transporting sediment to downstream reaches (OSAP, 2013).  Evidence of excessive sediment deposition might indicate the requirement to follow up with more detailed targeted assessments upstream of the site location to identify potential best management practices to be implemented.  Conditions ranged from no deposition observed to substantial deposition recorded. Figure 20 depicts the degree of sediment deposition observed at the sampled headwater sites in the Rideau-Merrickville catchment. 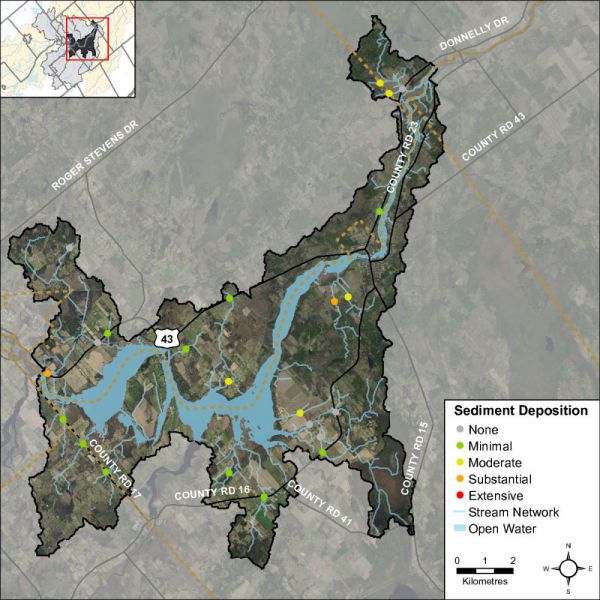 Feature roughness will provide a measure of the amount of materials within the bankfull channel that could slow down the velocity of water flowing within the headwater feature (OSAP, 2013).  Materials on the channel bottom that provide roughness include vegetation, woody debris and boulders/cobble substrates.  Roughness can provide benefits in mitigating downstream erosion on the headwater drainage feature and the receiving watercourse by reducing velocities.  Roughness also provides important habitat conditions to aquatic organisms. The sample locations in the Rideau-Merrickville catchment area ranged from minimal to extreme roughness conditions. Figure 21 shows the feature roughness conditions at the sampling locations in the Rideau-Merrickville catchment. 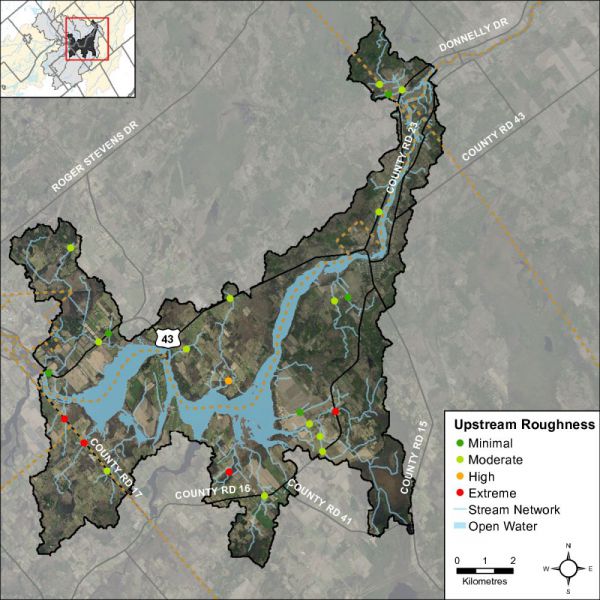 The Rideau-Merrickville catchment is classified as a mixed community of warm and cool water recreational and baitfish fishery with 27 species observed. Table 10 lists those species observed in the catchment (Source: MNR/RVCA). Figure 22 shows the sampling locations along the Rideau River and its tributaries. 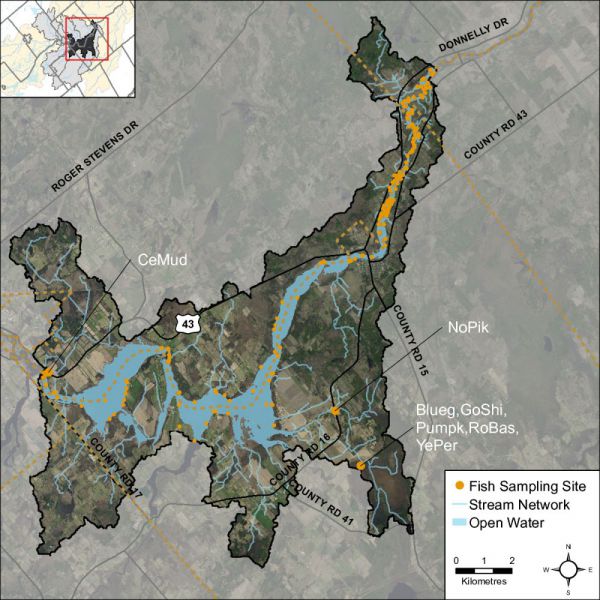 Figure 23 depicts the location of several riparian restoration opportunities as a result of observations made during the headwater drainage feature assessments. 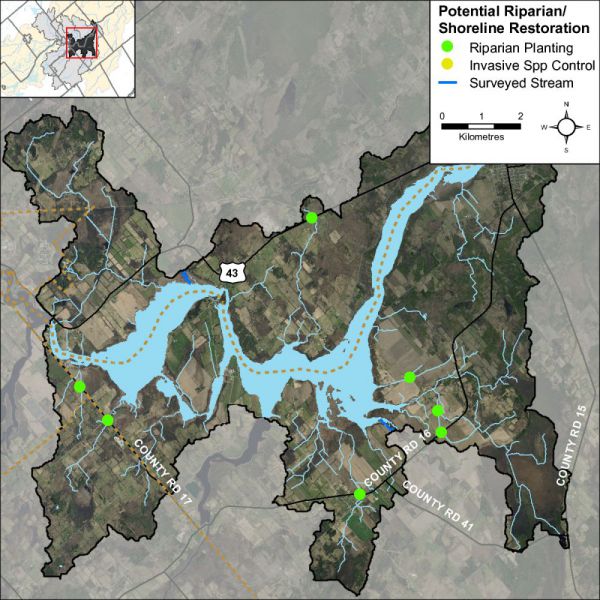 Figure 23 Riparian restoration opportunities along tributaries of the Rideau River