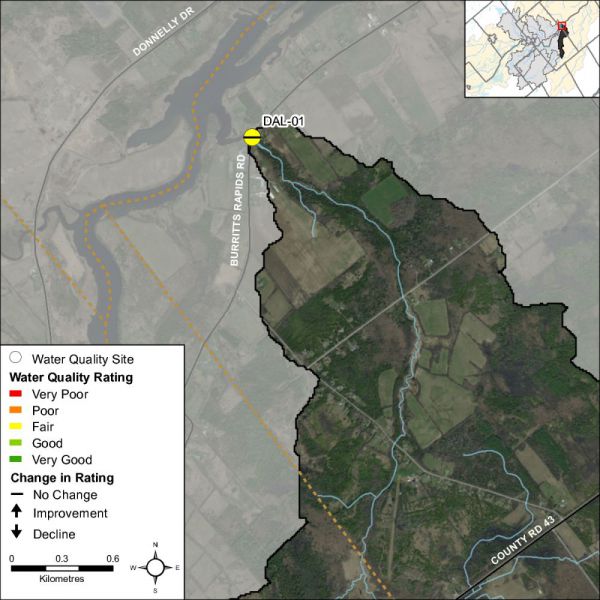 The water quality ratings for the Dales Creek catchment is “Fair” (Table 1) as determined by the Canadian Council of Ministers of the Environment (CCME) Water Quality Index and is largely influenced by high nutrient concentrations, metals and high bacterial counts. A "Fair" rating indicates that water quality is usually protected but is occasionally threatened or impaired; conditions sometimes depart from natural or desirable levels. Each parameter is evaluated against established guidelines to determine water quality conditions. Those parameters that frequently exceed guidelines are presented below. Analysis of the data has been broken into two periods; 2003 to 2008 and 2009 to 2014 for the stream monitoring site located on Dales Creek (DAL-01) to examine if conditions have changed between these periods. Table 1 shows the overall rating for the monitored surface water quality site within the Dales Creek catchment and Table 2 outlines the Water Quality Index (WQI) scores and their corresponding ratings. 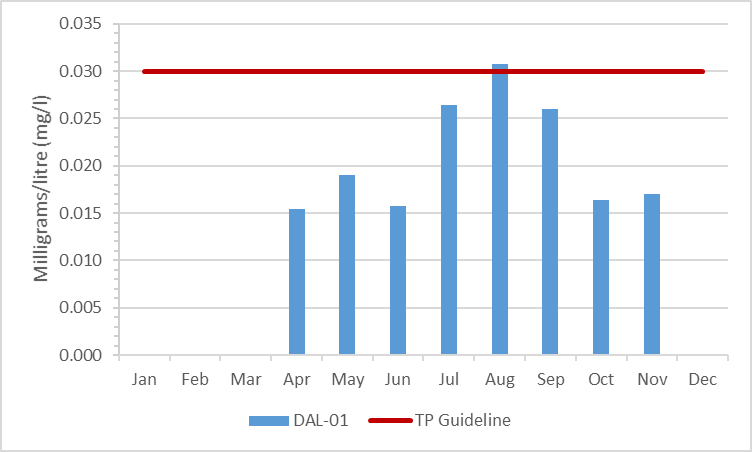 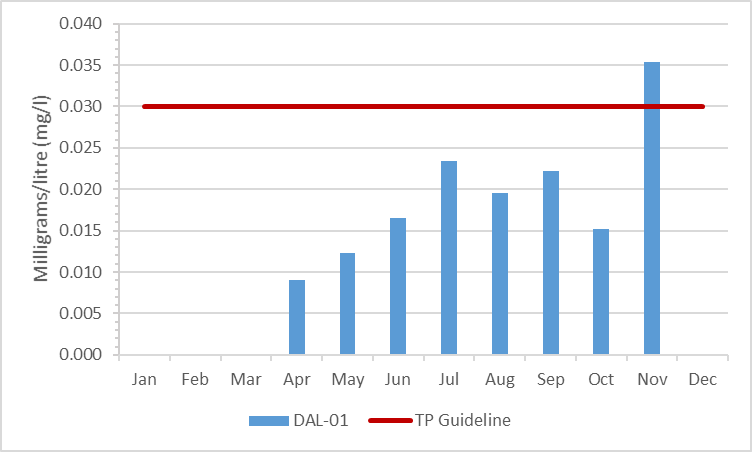 TKN concentrations show that the bulk of results exceeded the guideline (Figures 4 and 5); there were few samples (15 percent) below the guideline in the 2003-2008 period and this slightly increased to 19 percent in the 2009-2014 period. The average concentration was generally elevated and increased from 0.663 mg/l to 0.737 mg/l (Table 8). 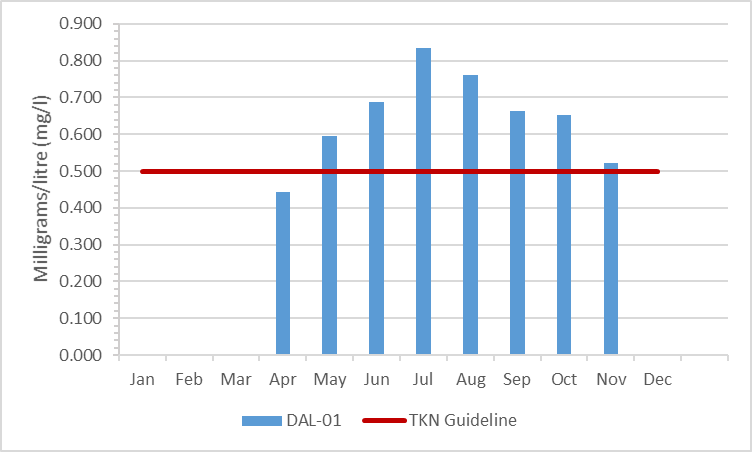 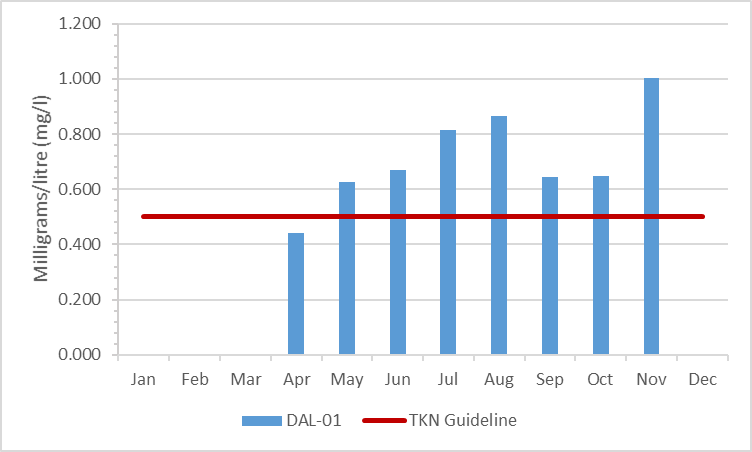 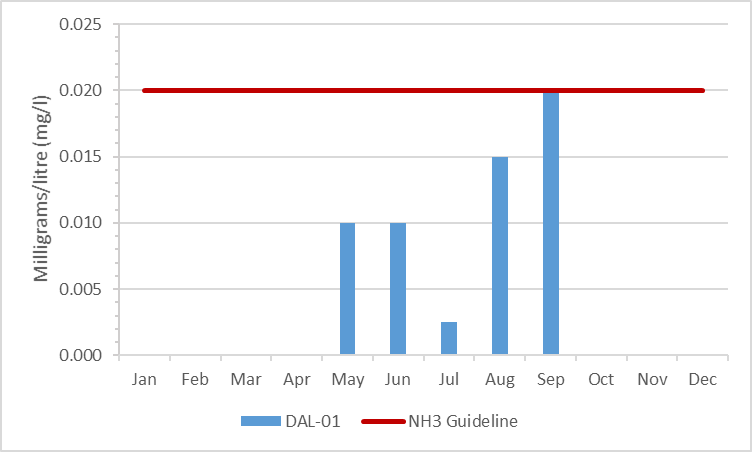 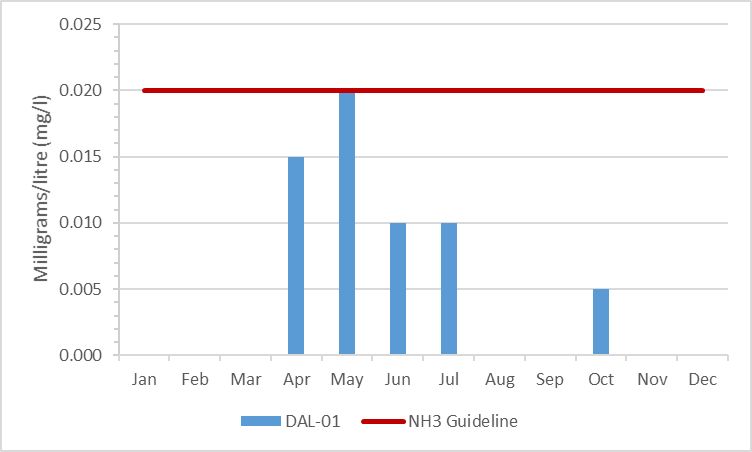 The data shows that nutrient enrichment is a feature of Dales Creek. Total phosphorous and NH3 occasionally exceed the guidelines while TKN concentrations frequently exceeded the guideline. Elevated TKN concentrations may be influenced by organic matter held by wetland areas found upstream in the Middle Rideau Subwatershed, resulting in naturally high concentrations of organic nitrogen. High nutrient concentrations can help stimulate the growth of algae blooms and other aquatic vegetation in a waterbody and deplete oxygen levels as the vegetation dies off. It is important to reduce human impacts wherever possible. Strategies to reduce nutrient inputs may include diversion of runoff to the creek and enhanced shoreline buffers.

Table 6 summarizes the geometric mean[2] for the monitored site on Dales Creek and shows the proportion of samples that meet the E. coli guideline of 100 CFU/100 ml. The results of the geometric mean with respect to the guideline for the two periods, 2003-2008 and 2009- 2014, are shown in Figures 8 and 9 respectively.

E. coli results at site DAL-01 indicate bacterial counts are occasionally above the E. coli guideline. The proportion of samples below the guideline increased from 34 percent (Figure 8) to 51 percent (Figure 9). E.coli counts decreased slightly between the two monitoring periods (2003-2008 and 2009-2014) with a geometric mean of 81 CFU/100ml to 79 CFU/100ml (Table 6). 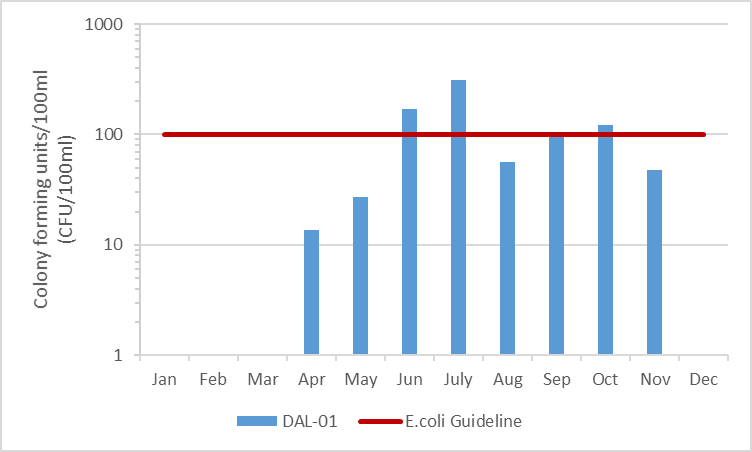 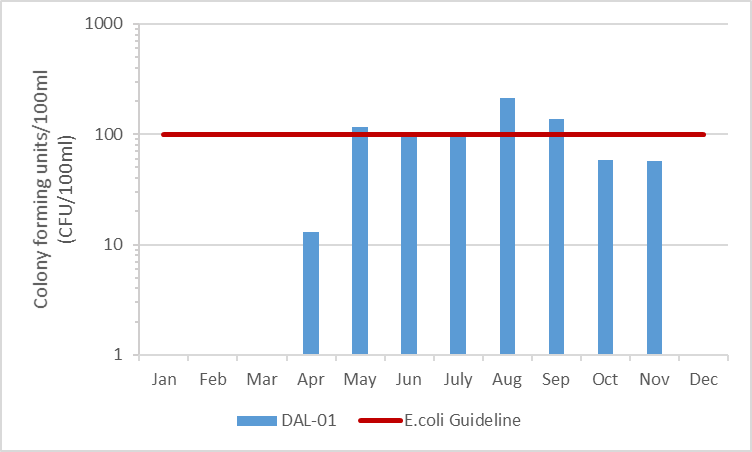 This data shows that E.coli results occasionally exceed the guidelines at site DAL-01 in Dales Creek. The geometric mean is below the PWQO for both monitoring periods and there has been a decrease in E.coli counts between 2003-2008 and 2009-2014. Properly maintaining septic systems, enhancing shoreline buffers and restricting cattle access can help to improve E.coli levels in Dales Creek.

Of the metals routinely monitored in Dales Creek, aluminum (Al), iron (Fe) and copper (Cu) occasionally reported concentrations above their respective PWQOs. In elevated concentrations, these metals can have toxic effects on sensitive aquatic species. 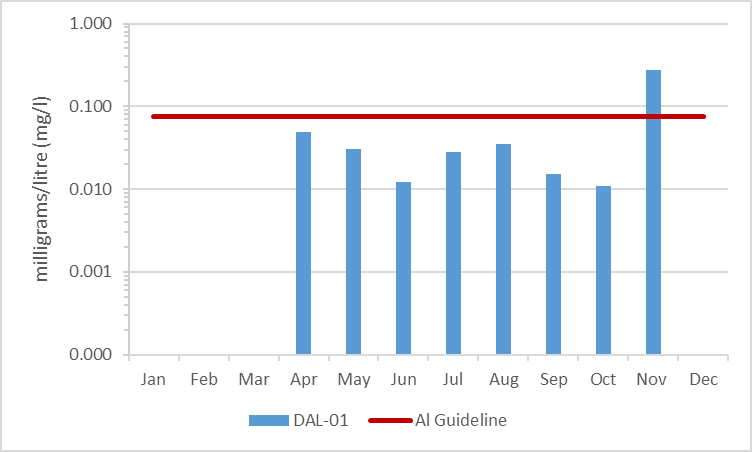 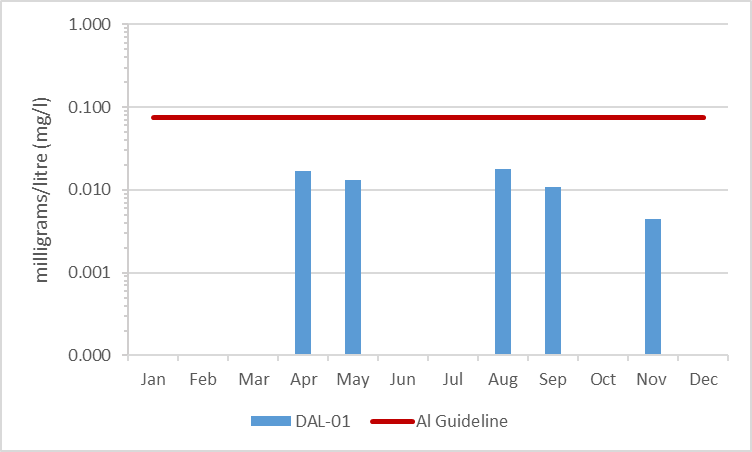 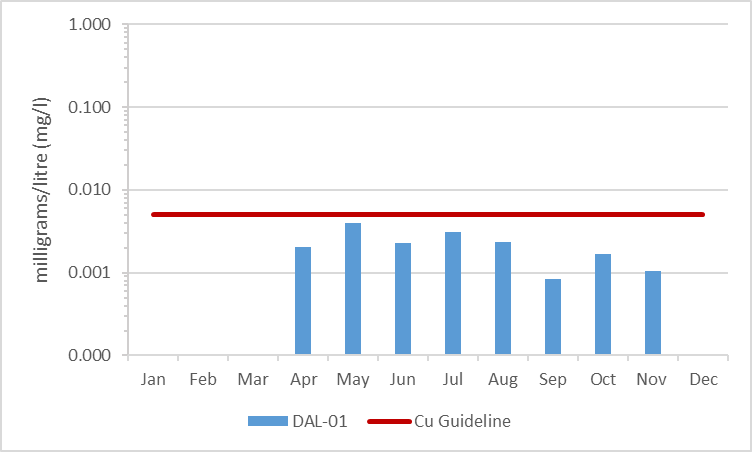 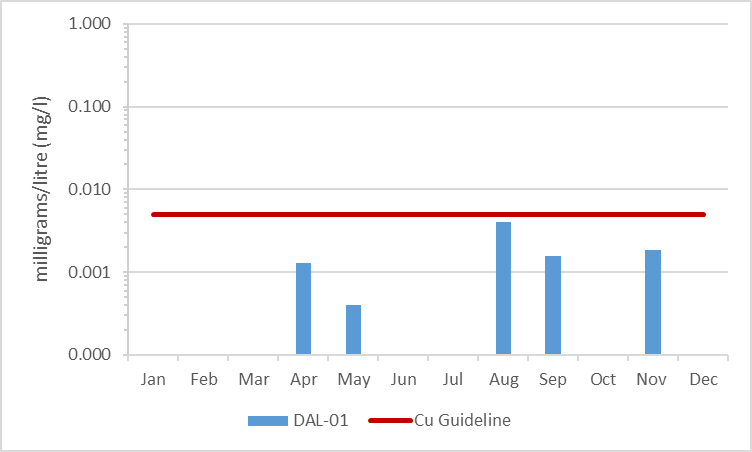 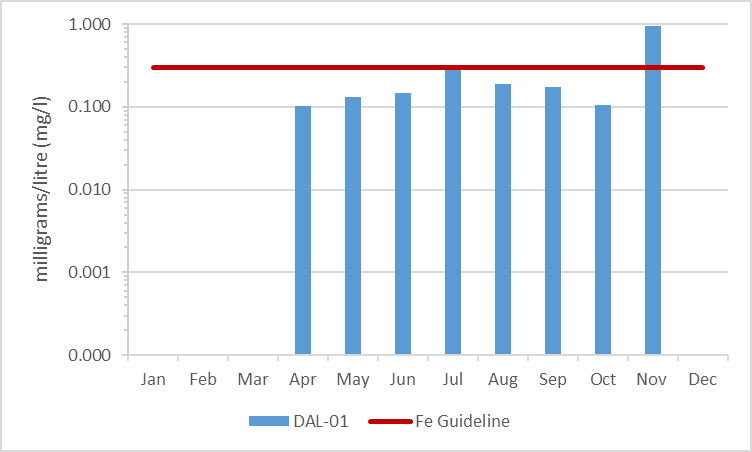 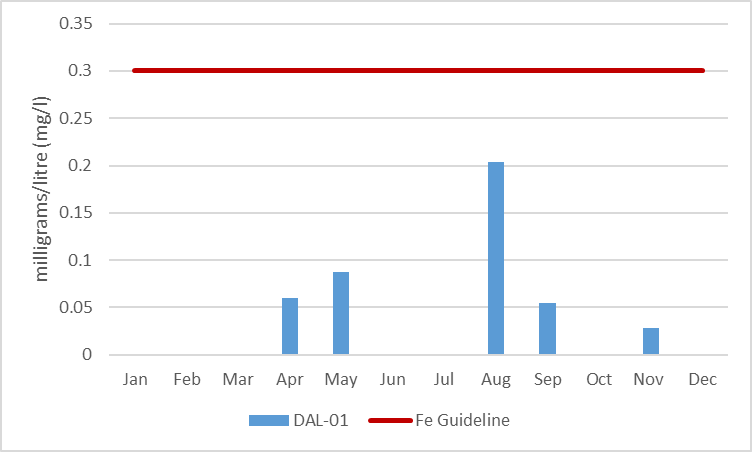