Land cover and any change in coverage that has occurred over a six year period is summarized for the Rosedale Creek catchment using spatially continuous vector data representing the catchment during the spring of 2008 and 2014. This dataset was developed by the RVCA through heads-up digitization of 20cm DRAPE ortho-imagery at a 1:4000 scale and details the surrounding landscape using 10 land cover classes.

As shown in Table 12, the dominant land cover type in the catchment through 2008 and 2014 was wetland along with crop and pastureland and woodland.

Table 12 Land cover (2008 vs. 2014) in the Rosedale Creek catchment
* Does not include treed swamps ** Includes treed swamps

From 2008 to 2014, there was an overall change of 143 hectares from one land cover class to another. The major land cover change in the Rosedale Creek catchment is a result of the conversion of woodland to crop and pastureland. A slightly smaller proportion of change is also associated with crop and pastureland (i.e., previously cultivated areas/fallow fields) emerging as young woodland (i.e., regenerative and/or plantation) (see Figure 55 for the location of the major changes). Another driving force identified as a factor of change is the conversion of crop and pastureland and woodland to settlement. 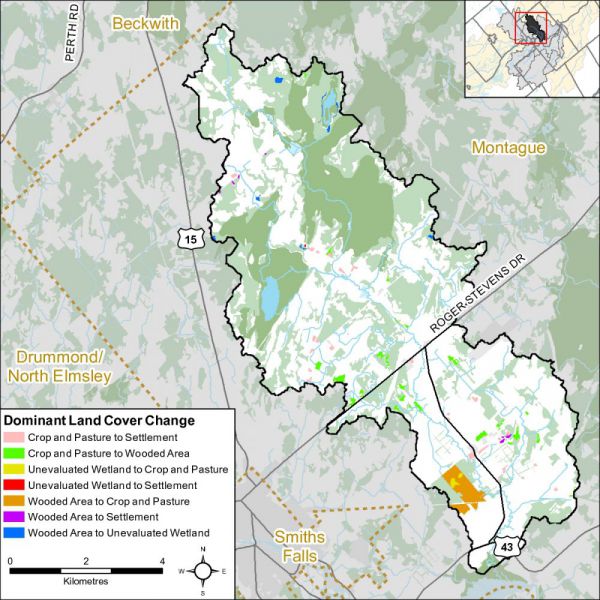 As shown in Figure 56, 30 percent of the Rosedale Creek catchment contains 1696 hectares of upland forest and 259 hectares of lowland forest (treed swamps) versus the 34 percent of woodland cover in the Middle Rideau subwatershed. This is the same as the 30 percent of forest cover that is identified as the minimum threshold required to sustain forest birds according to the Guideline and which may only support less than one half of potential species richness and marginally healthy aquatic systems. When forest cover drops below 30 percent, forest birds tend to disappear as breeders across the landscape. 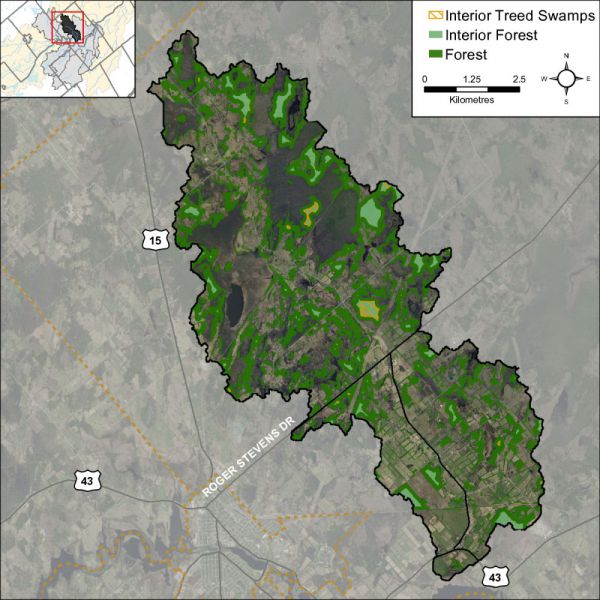 In the Rosedale Creek catchment (in 2014), 89 (38 percent) of the 231 woodland patches are very small, being less than one hectare in size. Another 109 (47 percent) of the woodland patches ranging from one to less than 20 hectares in size tend to be dominated by edge-tolerant bird species. The remaining 33 (15 percent of) woodland patches range between 21 and 104 hectares in size. Thirty-two of these patches contain woodland between 20 and 100 hectares and may support a few area-sensitive species and some edge intolerant species, but will be dominated by edge tolerant species.

Conversely, one (one percent) of the 231 woodland patches in the drainage area exceed the 100 plus hectare size needed to support most forest dependent, area sensitive birds and is large enough to support approximately 60 percent of edge-intolerant species. No patch tops 200 hectares, which according to the Environment Canada Guideline will support 80 percent of edge-intolerant forest bird species (including most area sensitive species) that prefer interior forest habitat conditions.

Table 14 presents a comparison of woodland patch size in 2008 and 2014 along with any changes that have occurred over that time. A decrease (of 29 ha) has been observed in the overall woodland patch area between the two reporting periods with most change occurring in the larger woodland patches in the catchment.

In the Rosedale Creek catchment (in 2014), the 231 woodland patches contain 67 forest interior patches (Figure 56) that occupy three percent (183 ha.) of the catchment land area (which is less than the five percent of interior forest in the Middle Rideau Subwatershed). This is below the ten percent figure referred to in the Environment Canada Guideline that is considered to be the minimum threshold for supporting edge intolerant bird species and other forest dwelling species in the landscape.

Using the same dataset, it is estimated that pre-settlement (historic) wetland cover averaged 32 percent in the Middle Rideau subwatershed versus the 27 percent of cover existing in 2014. This decline in wetland cover is also evident in the Rosedale Creek catchment (as seen in Figure 57) where there has been a one percent decrease in the area of wetland cover from pre-settlement times to the present (as summarized in Table 16). 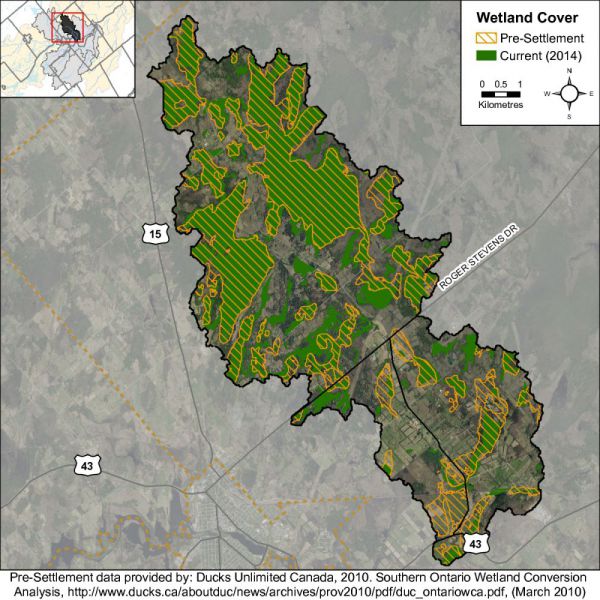 While there has been a reported decrease in wetland cover in the Rosedale Creek catchment from pre-settlement times, the remaining wetland cover in 2014 remains above the ecological thresholds cited in the Environment Canada Guideline. Nonetheless, in order to maintain critical hydrological, ecological functions along with related recreational and economic benefits provided by these wetland habitats in the catchment, a “no net loss” of currently existing wetlands should be employed to ensure the continued provision of tangible benefits accruing from them for landowners and surrounding communities.