The RVCA and its partners are working to protect and enhance environmental conditions in the Jock River Subwatershed. Figure 61 shows the location of all stewardship projects completed in the Jock River-Barrhaven catchment along with sites identified for potential shoreline restoration. 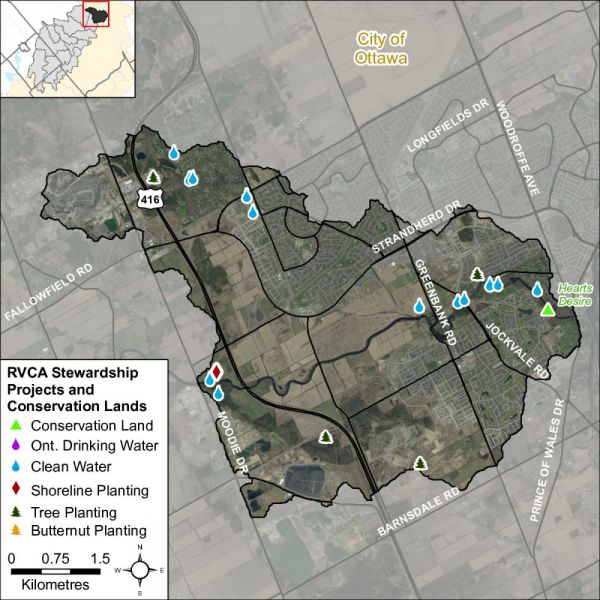 With the assistance of the RVCA’s Shoreline Naturalization Program, 475 trees and shrubs were planted to create an overall six metre long shoreline buffer at a total project value of $14,234.

Fish habitat compensation was required for the Barrhaven South development as a number of tributary watercourses were eliminated or modified to allow for development.  A bypass pond was constructed off the main stem of the Jock River in 2008 to provide spawning and nursery habitat for northern pike and muskellunge in the spring and nursery and refugia habitat in the summer and fall.   Under normal high water mark conditions, it provides approximately 9,000 meters square of habitat along with several small finger channels that extend from the larger pond to provide spawning habitat for northern pike. Post effectiveness monitoring work in 2010 revealed that thirteen species of fish were utilizing the habitat for spawning, nursery, rearing and feeding purposes, including northern pike. Subsequent fish sampling in 2015 confirmed that several species of fish continue to utilize the restored habitat within the pond feature. 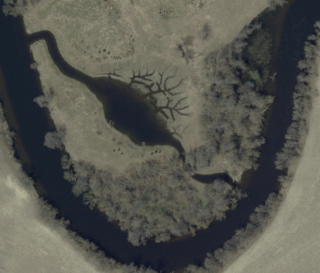 The Barrhaven catchment covers 31 square kilometres with 4.8 square kilometres (or 16 percent) of the drainage area being within the regulation limit of Ontario Regulation 174/06 (Figure 62), giving protection to wetland areas and river or stream valleys that are affected by flooding and erosion hazards.

Of the 50.3 kilometres of stream in the catchment, regulation limit mapping has been plotted along 22.1 kilometers of streams (representing 44 percent of all streams in the catchment). Some of these regulated watercourses (0.5 km or 1.0 percent of all streams) flow through regulated wetlands; the remaining 21.6 km (or 98 percent) of regulated streams are located outside of those wetlands. Plotting of the regulation limit on the remaining 28.2 km (or 56 percent) of streams requires identification of flood and erosion hazards and valley systems.

Within those areas of the Barrhaven catchment subject to the RVCA regulation (limit), efforts (have been made and) continue through RVCA planning and regulations input and review to manage the impact of development (and other land management practices) in areas where “natural hazards” are associated with rivers, streams, valley lands and wetlands. Additionally, in the rapidly urbanizing areas of the Barrhaven catchment, significant effort is made through land use planning and development control processes and carefully planned stormwater management systems, initially guided by master drainage planning and integrated subwatershed planning, to meet the natural heritage and natural hazards policies presented in the City of Ottawa Official Plan. Also, within areas beyond the regulation limit, protection of the catchment’s watercourses is provided through the “alteration to waterways” provision of the regulation. 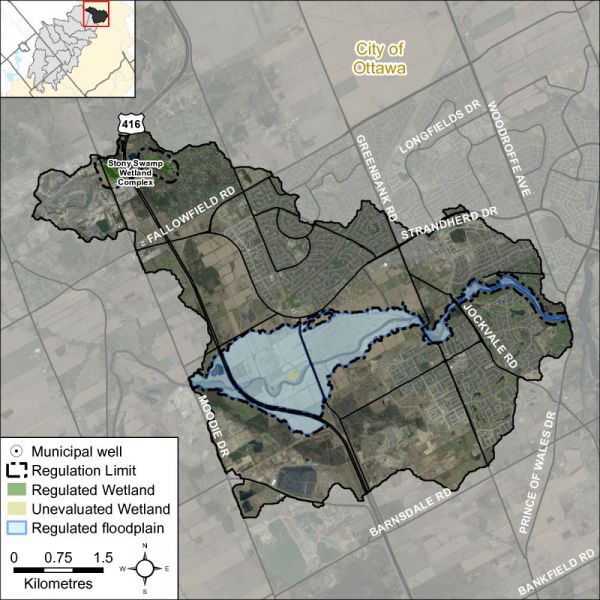 The Jock River-Barrhaven drainage catchment is considered to have a Highly Vulnerable Aquifer. This means that the nature of the overburden (thin soils, fractured bedrock) does not provide a high level of protection for the underlying groundwater making the aquifer more vulnerable to contaminants released on the surface. The Mississippi-Rideau Source Protection Plan includes policies that focus on the protection of groundwater region-wide due to the fact that most of the region, which encompasses the Mississippi and Rideau watersheds, is considered Highly Vulnerable Aquifer.