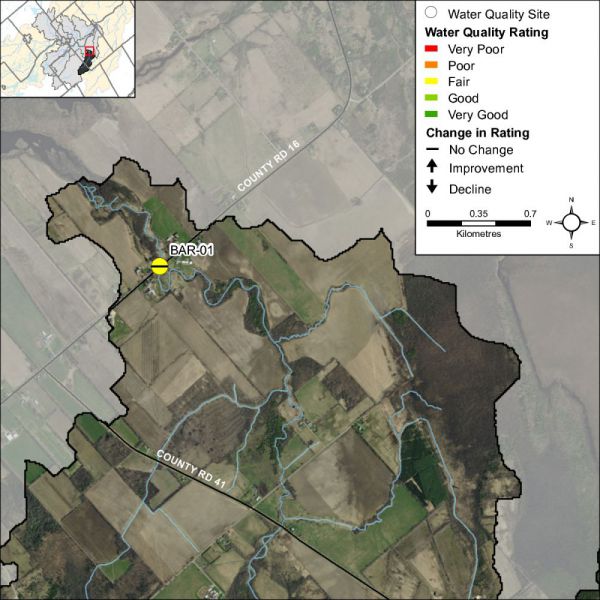 The water quality ratings for the Barbers Creek catchment is “Fair” (Table 1) as determined by the Canadian Council of Ministers of the Environment (CCME) Water Quality Index CCME and is largely influenced by high nutrient concentrations, metals and high bacterial counts. A "Fair" rating indicates that water quality is usually protected but is occasionally threatened or impaired; conditions sometimes depart from natural or desirable levels. Each parameter is evaluated against established guidelines to determine water quality conditions. Those parameters that frequently exceed guidelines are presented below. Analysis of the data has been broken into two periods; 2003 to 2008 and 2009 to 2014 for the stream monitoring site located on Barbers Creek (BAR-01) to examine if conditions have changed between these periods. Table 1 shows the overall rating for the monitored surface water quality site within the Barbers Creek catchment and Table 2 outlines the Water Quality Index (WQI) scores and their corresponding ratings.

Tables 3, 4 and 5 summarize average nutrient concentrations at monitored sites within the Barbers Creek catchment and show the proportion of results that meet the guidelines. 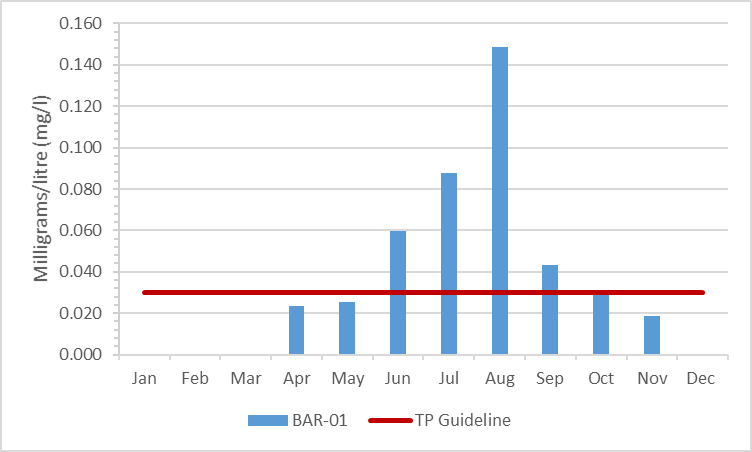 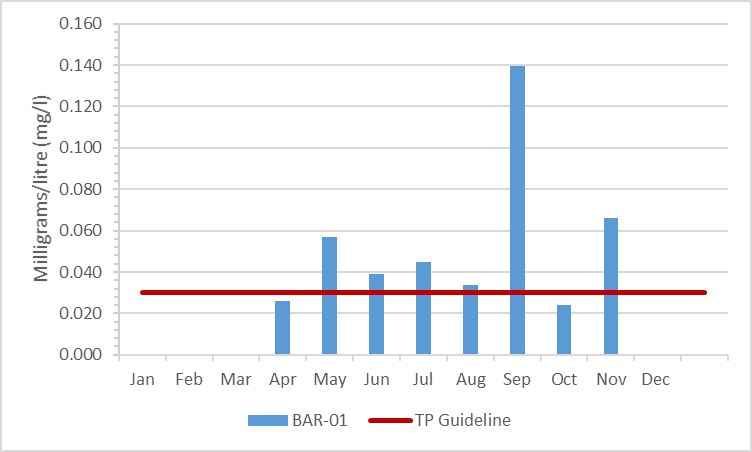 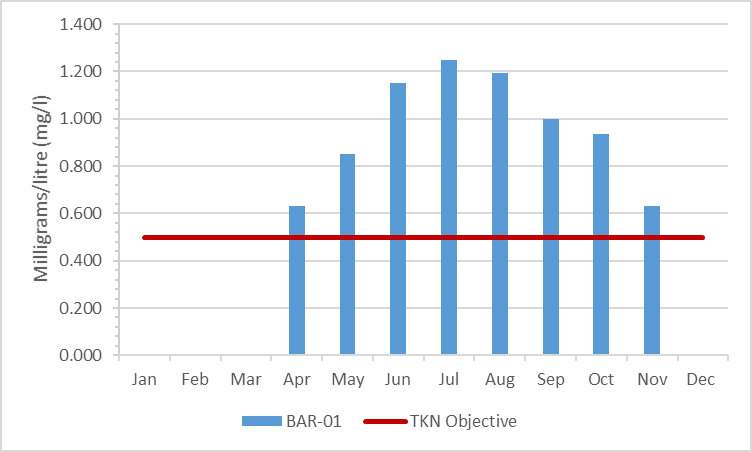 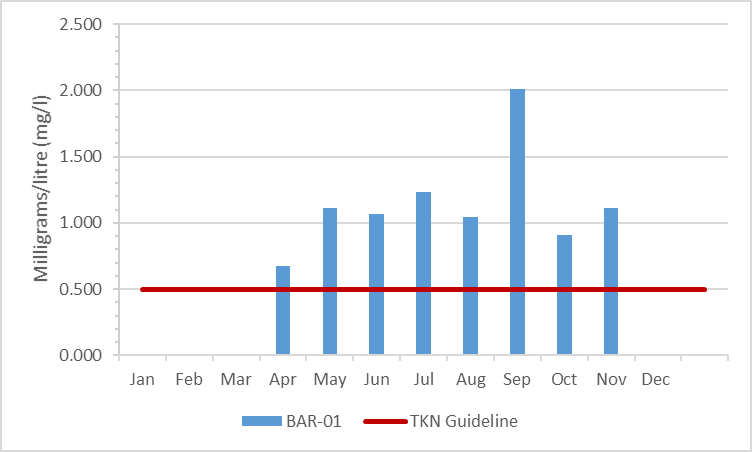 NH3 data also reported regular instances of exceedances and results at this site were generally above the guideline of 0.020 mg/l (Figures 6 and 7); the proportion of samples below the guideline declined slightly from 38 percent to 33 percent. The average concentration in the 2003-2008 monitoring period was 0.068 mg/l, well above the PWQO. In the 2009-2014 period the average concentration declined to 0.018 mg/l which is still slightly above the PWQO (Table 5). 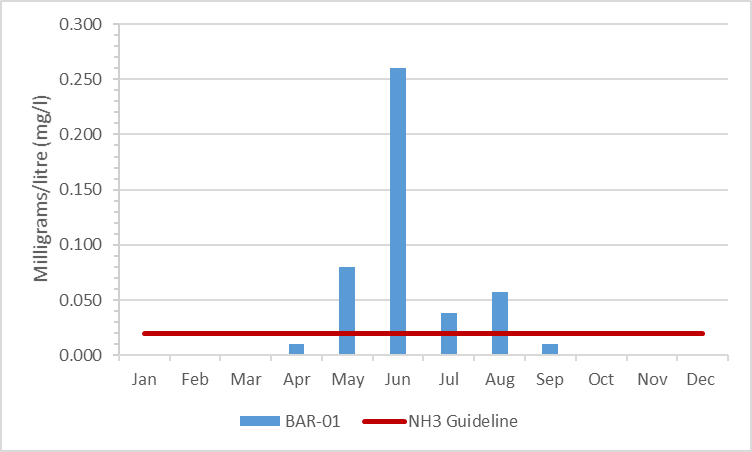 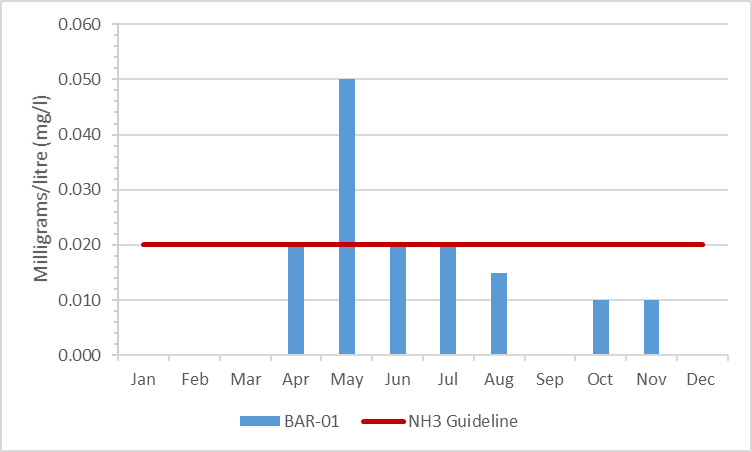 The data shows that nutrient enrichment is a characteristic of Barbers Creek. High nutrient concentrations can help stimulate the growth of algae blooms and other aquatic vegetation in a waterbody and deplete oxygen levels as the vegetation dies off.

E. coli is used as an indicator of bacterial pollution from human or animal waste; in elevated concentrations it can pose a risk to human health. The PWQO of 100 colony forming units/100 milliliters (CFU/100 ml) is used to assess E. coli. Counts greater than this guideline indicate that bacterial contamination may be a problem within the watercourse.

Table 6 summarizes the geometric mean[2] for the monitored site on Barbers Creek and shows the proportion of samples that meet the E. coli guideline of 100 CFU/100 ml. The results of the geometric mean with respect to the guideline for the two periods, 2003-2008 and 2009- 2014, are shown in Figures 8 and 9 respectively. 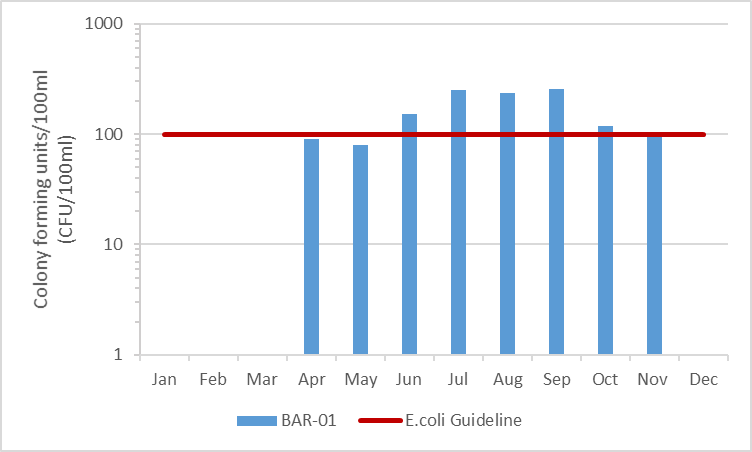 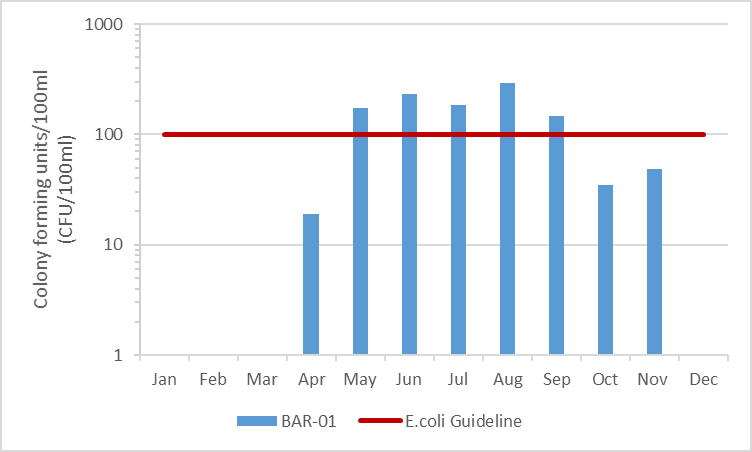 This data shows that bacterial contamination is a concern on Barbers Creek. There has been an improvement from the 2003-2008 to the 2009-2014 monitoring period, however the count at the geometric mean is above the PWQO for both monitoring periods. Properly maintaining septic systems, enhancing shoreline buffers and restricting cattle access can help to improve E.coli levels in Barbers Creek.

Of the metals routinely monitored in Barbers Creek, aluminum (Al), iron (Fe) and copper (Cu) occasionally reported concentrations above their respective PWQOs. In elevated concentrations, these metals can have toxic effects on sensitive aquatic species.

Table 7 Summary of Aluminum results for Barbers Creek from 2003-2008 and 2009-2014; highlighted values indicate the average concentration exceeds the guideline 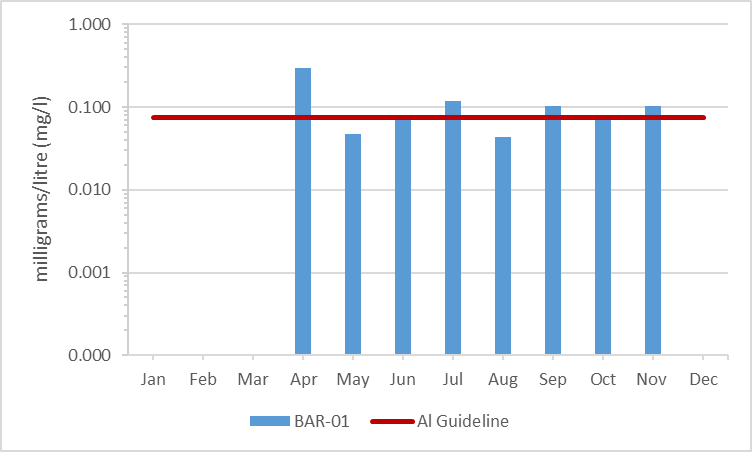 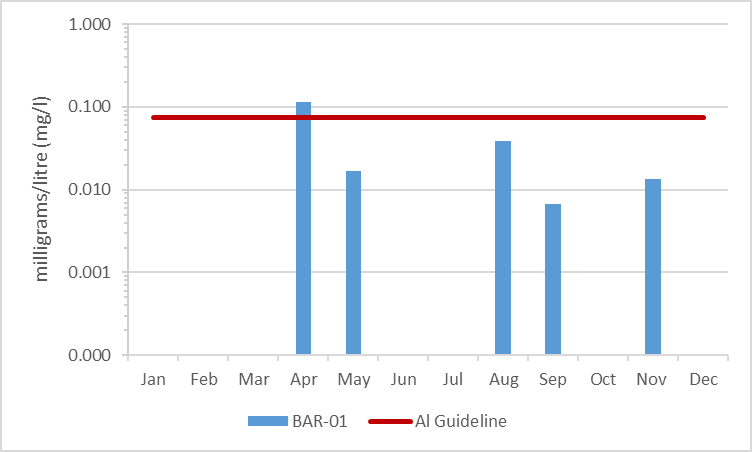 Concentrations of Fe also exceeded the PWQO guideline at times but were generally lower than Al. The proportion of Fe samples below the guideline increased from 67 percent to 96 percent (Figures 12 and 13). Although there were observed exceedances, the average concentration of Fe did not exceed the guideline in both monitoring periods; 0.280 mg/l in 2003-2008 and .083 mg/l in 2009-2014. 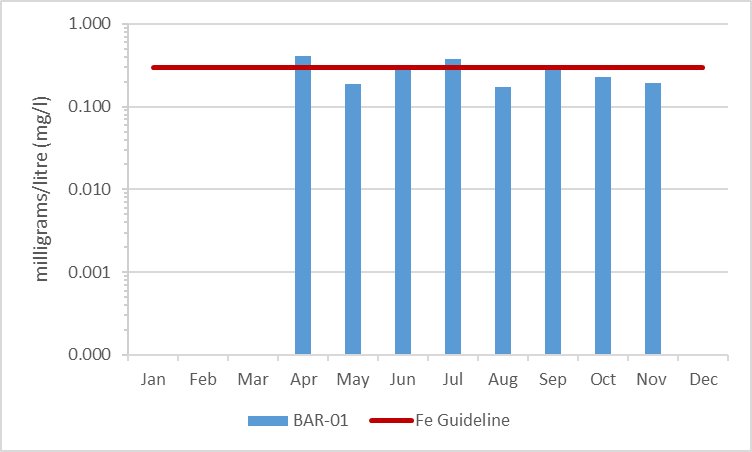 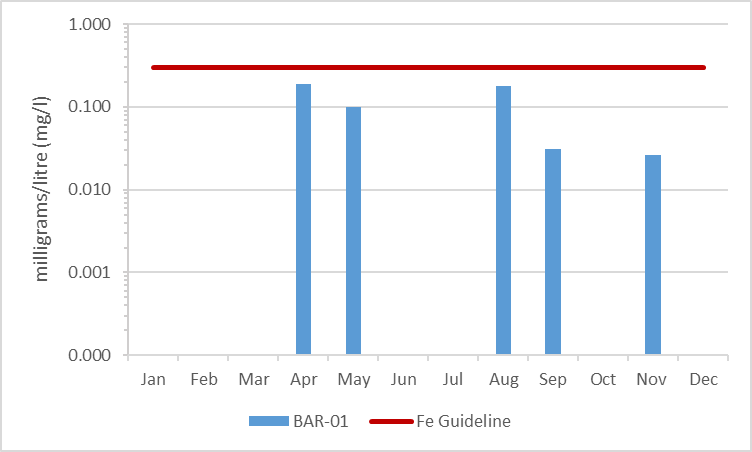 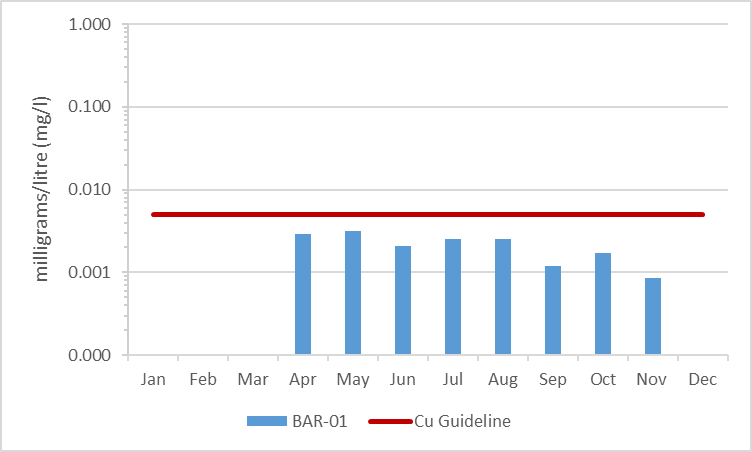 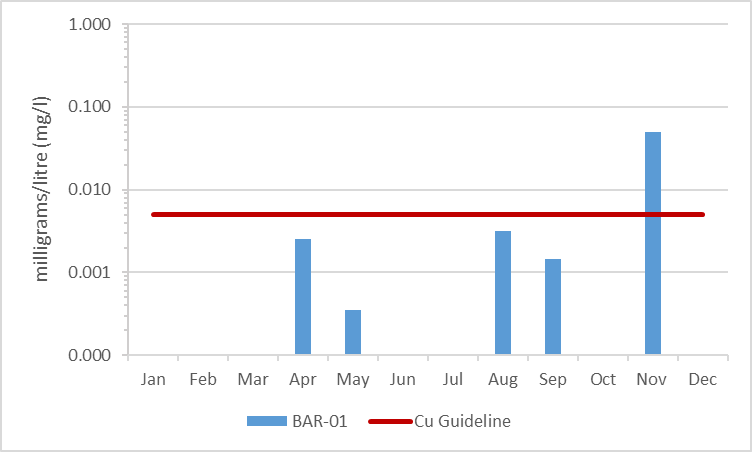 Aluminum and Iron concentrations declined, while Copper concentrations increased slightly between the two periods of interest. Efforts should continue to be made to identify pollution sources and implement best management practices to reduce any inputs such as runoff, metal alloys, fungicides and pesticides to improve overall stream health and lessen downstream impacts.