Surface water quality conditions in the Leamy Creek catchment of the Jock River are monitored by the City of Ottawa Baseline Water Quality Monitoring Program. This program provides information on the condition of Ottawa’s surface water resources; data is collected for multiple parameters including nutrients (total phosphorus, total Kjeldahl nitrogen and ammonia), E. coli, metals (like aluminum and copper) and additional chemical/physical parameters (such as alkalinity, chlorides, pH and total suspended solids). The locations of monitoring sites are shown in Figure 2 and Table 1. 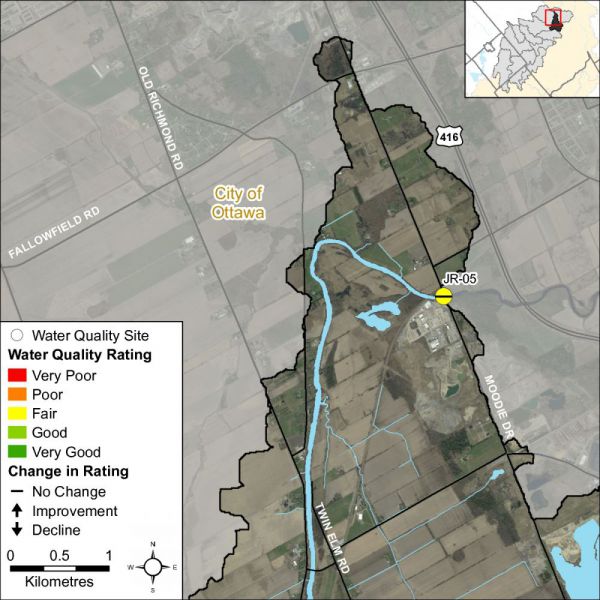 The RVCA's water quality rating for Jock River site JR-05 is “Fair” (Table 1) as determined by the Canadian Council of Ministers of the Environment (CCME) Water Quality Index[1]. A “Fair” rating indicates that water quality is usually protected but is occasionally threatened or impaired; conditions sometimes depart from natural or desirable levels. Each parameter is evaluated against established guidelines to determine water quality conditions. Those parameters that frequently exceed guidelines are presented below. Analysis of the data has been broken into two periods; 2004 to 2009 and 2010 to 2015 to examine if conditions have changed between these periods. Table 1 shows the overall rating for the monitored surface water quality site within the Leamy Creek catchment and Table 2 outlines the Water Quality Index (WQI) scores and their corresponding ratings.

There is one monitored water quality site on the Jock River in the Leamy Creek catchment (JR-05, Figure 2). The water quality score at this site had only a minor decline in the water quality score when compared between periods; reporting as “Fair” in each time frame (Table 1). The score at this site is largely influenced by frequent high nutrient concentrations and occasional metal exceedances. For more information on the CCME WQI, please see the Jock River Subwatershed Report.

Tables 3, 4 and 5 summarize average nutrient concentrations at the monitored site within the Leamy Creek catchment and show the proportion of results that meet the guidelines.

Site JR-05 had elevated TP concentrations in both monitoring periods and remained consistent between the two time frames, 2004-2009 and 2010-2015 (Figures 3 and 4). In both time periods only 32 percent of samples were below the guideline and average TP concentrations exceeded the PWQO at 0.042 mg/l (Table 3).

Total Kjeldahl nitrogen concentrations were consistently high with only a few samples below the guideline of 0.500 mg/l. The proportion of samples below the guideline dropped from 10 percent in the 2004-2009 monitoring period to zero samples in the 2010-2015 period (Figures 5 and 6), the average concentrations increased from 0.759 mg/l to 0.796 mg/l during this timeframe (Table 4).

Ammonia results also showed evidence of increased concentrations at site JR-05. The proportion of samples below the guideline dropped from 50 percent to only 13 percent between the two monitoring periods 2004-2009 and 2010-2015, (Figures 7 and 8). This also mirrors a slight increase in the NH3 concentration from 0.038 mg/l to 0.044 mg/l (Table 5). 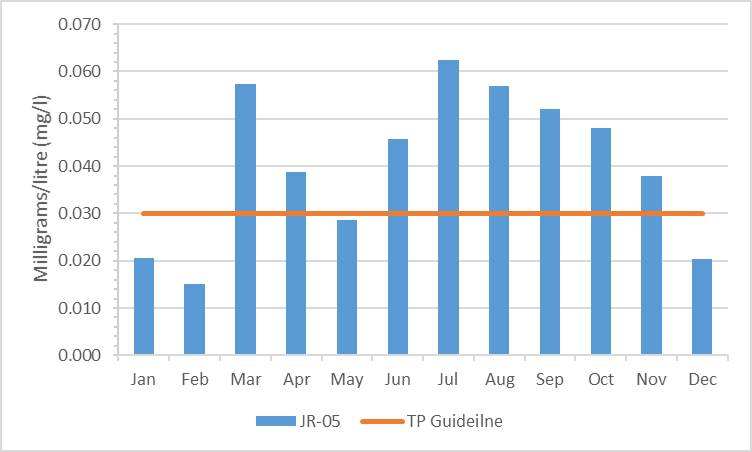 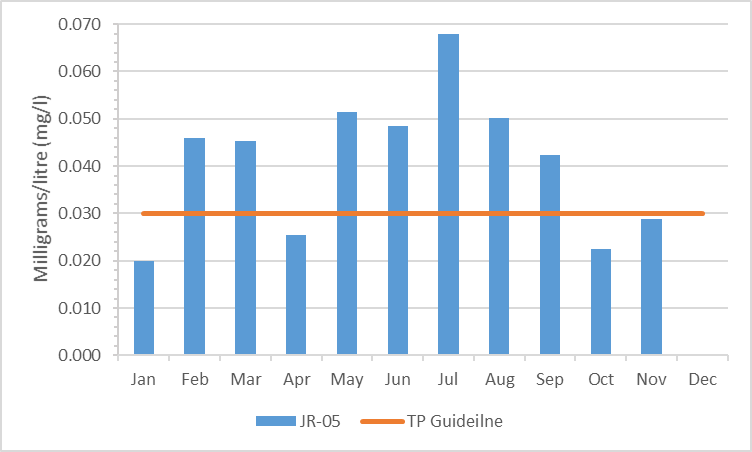 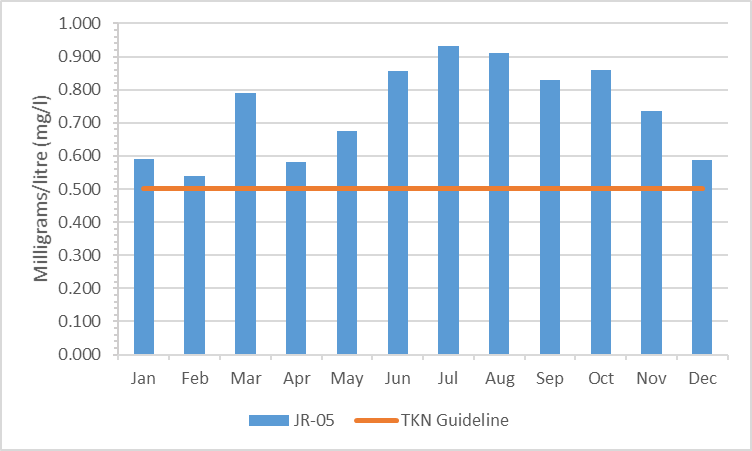 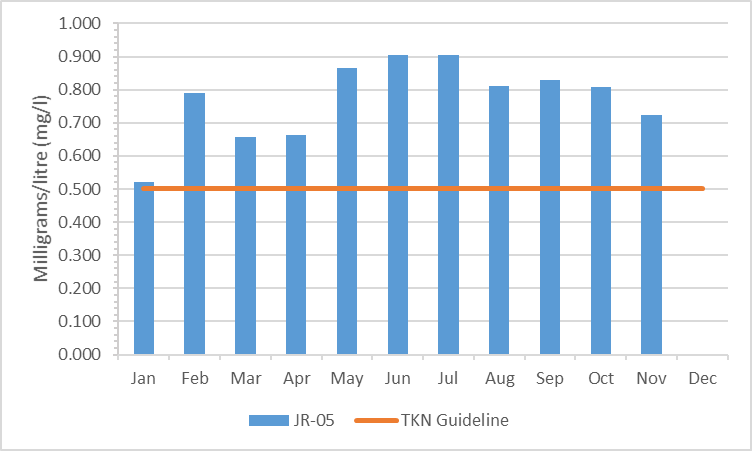 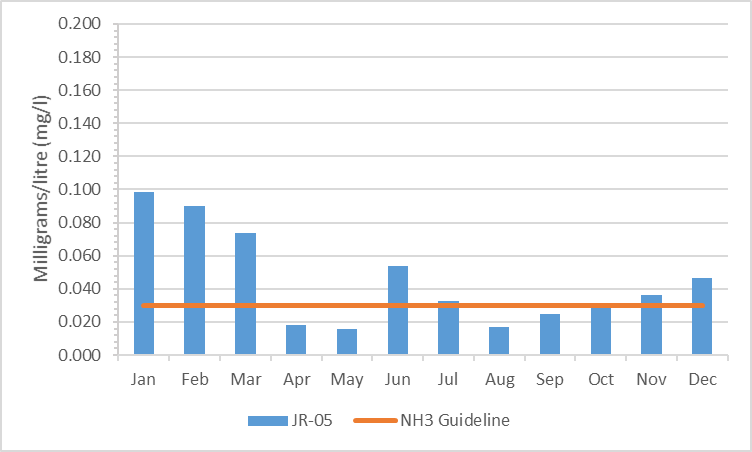 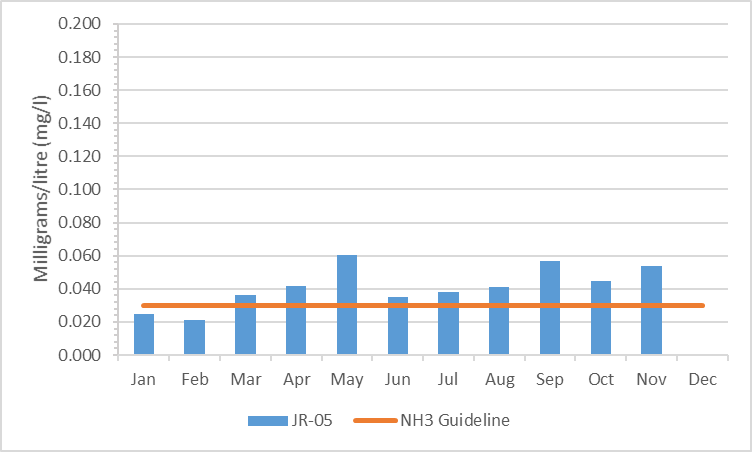 Nutrient enrichment is a feature in this reach of the Jock River. Overall, average nutrient concentrations have remained consistent through the monitoring periods. All parameters (total phosphorus, total Kjeldahl nitrogen and ammonia) are above guidelines.  Elevated nutrients may result in nutrient loading downstream and to the Rideau River. High nutrient concentrations can help stimulate the growth of algae blooms and other aquatic vegetation in a waterbody and deplete oxygen levels as the vegetation dies off. Best management practices such as enhanced shoreline buffers, limiting the use of fertilizers and restricting livestock access in upstream agricultural areas can help to reduce nutrient enrichment in Jock River.

Table 6 summarizes the geometric mean[3] for the monitored site on the Jock River within the Leamy Creek catchment and shows the proportion of samples that meet the E. coli guideline of 100 CFU/100 ml. The results of the geometric mean with respect to the guideline for the two periods, 2004-2009 and 2010-2015, are shown in Figures 9 and 10 respectively. 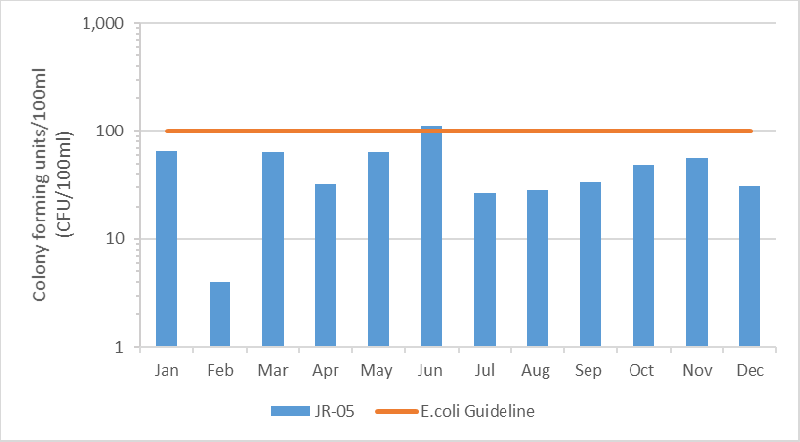 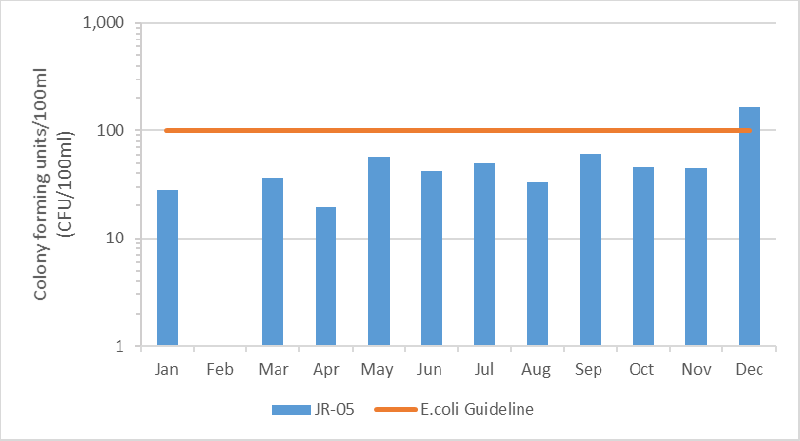 Bacterial contamination does not appear to be a significant concern in this reach of the Jock River, this is comparable to findings by the City of Ottawa’s Water Environment Protection Program (2006). There are occasional exceedances and counts at the geometric mean were below the guideline of 100 CFU/100ml. Best management practices such as enhancing shoreline buffers and restricting livestock access, and improved storm water management can help to protect this reach of the Jock River into the future.

Of the metals routinely monitored in the Jock River (Leamy Creek Catchment) aluminum (Al) and copper (Cu) occasionally reported concentrations above their respective PWQOs. For Al, the PWQO is 0.075 mg/l and for Cu it is 0.005 mg/l. In elevated concentrations, these metals can have toxic effects on sensitive aquatic species. 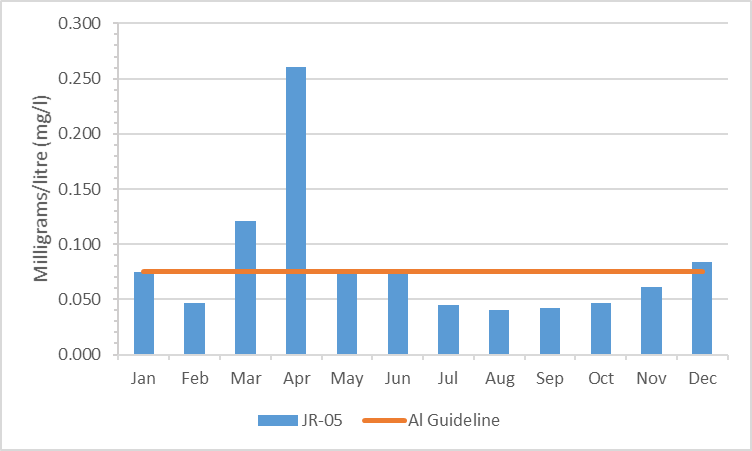 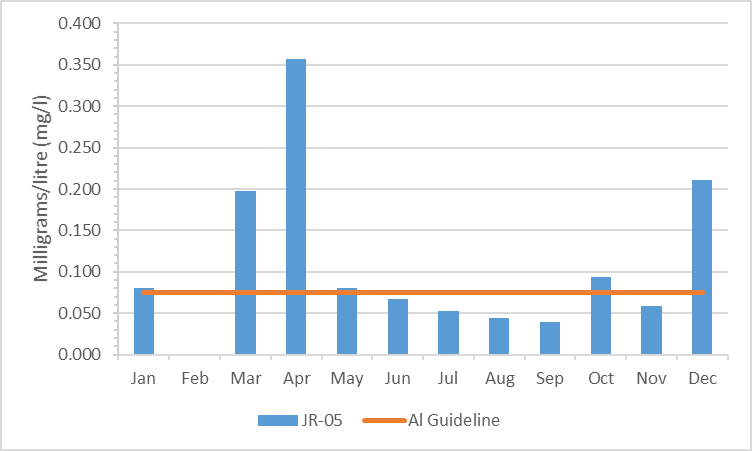 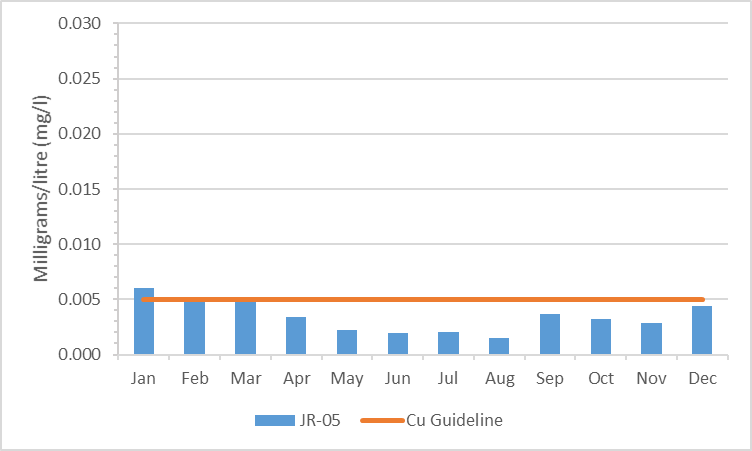 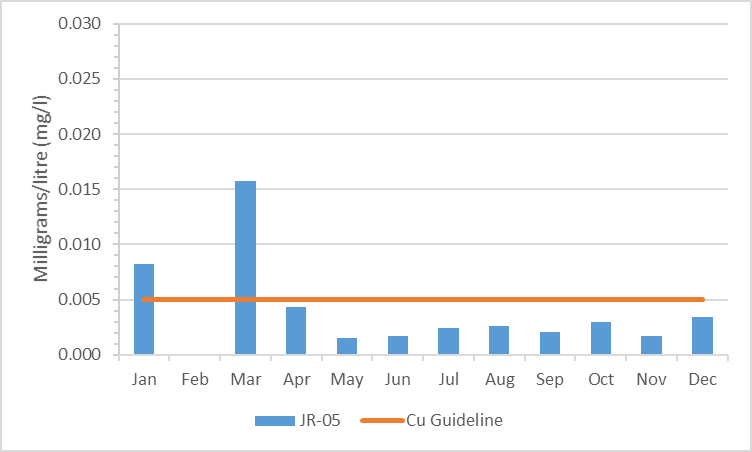 In the Leamy Creek catchment aluminum concentrations have increased at site JR-05 while copper concentrations have remained consistent with slight improvements.  Most increases in concentrations are observed during the spring likely due to increased runoff  from melt conditions, efforts should continue to be made to identify pollution sources and implement best management practices to reduce any inputs such as storm water runoff, metal alloys, fungicides and pesticides to improve overall stream health and lessen downstream impacts.

1 The City of Ottawa Baseline Water Quality Monitoring Program has also applied the CCME WQI to monitored sites. The parameters used and time periods differs between the RVCA and City of Ottawa’s application of the WQI, resulting in different ratings at some sites.

3A type of mean or average, which indicates the central tendency or typical value of a set of numbers by using the product of their values (as opposed to the arithmetic mean which uses their sum). It is often used to summarize a variable that varies over several orders of magnitude, such as E. coli counts