The RVCA and its partners are working to protect and enhance environmental conditions in the Jock River Subwatershed. Figure 67 shows the location of all stewardship projects completed in the Jock River-Richmond catchment along with sites identified for potential shoreline restoration. 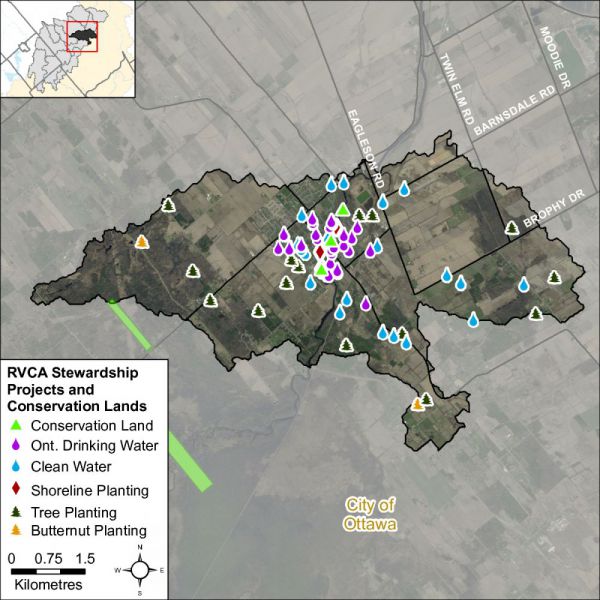 Through the RVCA Butternut Recovery Program, an additional 50 butternut trees were planted in the Richmond catchment (Figure 67) between 2004 and 2015, as part of efforts to introduce healthy seedlings from tolerant butternuts into various locations across Eastern Ontario.

With the assistance of the RVCA’s Shoreline Naturalization Program, 1954 trees and shrubs were planted to create an overall 1,372 metre long shoreline buffer at a total project value of $22,818.

Figure 67 shows the location of all Ontario Drinking Water Stewardship Program (ODWSP) projects in the Jock River-Richmond catchment. From 2010 to 2015, 11 well upgrades, three septic decommissionings, three sewer line connections, two fuel handling and storage facilities, one well decommissioning and one septic system repair/replacement were completed. Between 2004 and 2009, 6 well upgrades were carried out. Total value of all 27 projects is $73,144 with $45,934 of that amount funded by the Ontario Ministry of the Environment.

The RVCA in partnership with Fisheries and Oceans Canada, Shell Fuelling Change, Muskies Canada Ottawa Chapter, National Defence Fish and Game Club, Community Foundation of Ottawa, Fendock and the Ottawa Flyfishers Society constructed a fish habitat embayment at the Richmond Conservation Area in October 2014. The project involved converting an existing grassed park area into a small wetland embayment along the shoreline of the Jock River and created 1000 square metres of new spawning, nursery, rearing, and feeding habitat to support the 40 species of fish that reside in the Jock River. It also resulted in approximately 100 metres of new shoreline being created by re-grading the existing slope and planting a shoreline buffer around the perimeter of the new embayment feature. Many volunteers participated in the construction of the embayment and contributed 294 volunteer hours towards the project. Post monitoring results have shown that the feature is meeting its objectives by providing enhanced fish habitat and amphibian breeding habitat. 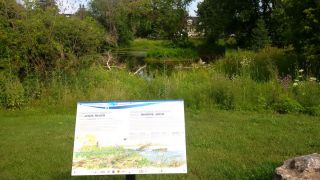 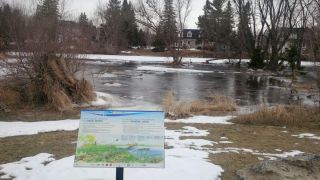 The Richmond catchment covers 31 square kilometres with 9.1 square kilometres (or 29 percent) of the drainage area being within the regulation limit of Ontario Regulation 174/06 (Figure 68), giving protection to wetland areas and river or stream valleys that are affected by flooding and erosion hazards.

Of the 60.4 kilometres of stream in the catchment, regulation limit mapping has been plotted along 32.1 kilometers of streams (representing 53 percent of all streams in the catchment). Some of these regulated watercourses (6.1 km or 10 percent of all streams) flow through regulated wetlands; the remaining 26.0 km (or 81 percent) of regulated streams are located outside of those wetlands. Plotting of the regulation limit on the remaining 28.3 km (or 47 percent) of streams

Within those areas of the Richmond catchment subject to the regulation (limit), efforts (have been made and) continue through RVCA planning and regulations input and review to manage the impact of development (and other land management practices) in areas where “natural hazards” are associated with rivers, streams, valley lands and wetlands. For areas beyond the regulation limit, protection of the catchment’s watercourses is only provided through the “alteration to waterways” provision of the regulation.

Within those areas of the Richmond catchment subject to the RVCA regulation (limit), efforts (have been made and) continue through RVCA planning and regulations input and review to manage the impact of development (and other land management practices) in areas where “natural hazards” are associated with rivers, streams, valley lands and wetlands. Additionally, in the urbanizing areas of the Richmond catchment, significant effort is made through land use planning and development control processes and carefully planned stormwater management systems, initially guided by master drainage planning and integrated subwatershed planning, to meet the natural heritage and natural hazards policies presented in the City of Ottawa Official Plan. Also, within areas beyond the regulation limit, protection of the catchment’s watercourses is provided through the “alteration to waterways” provision of the regulation. 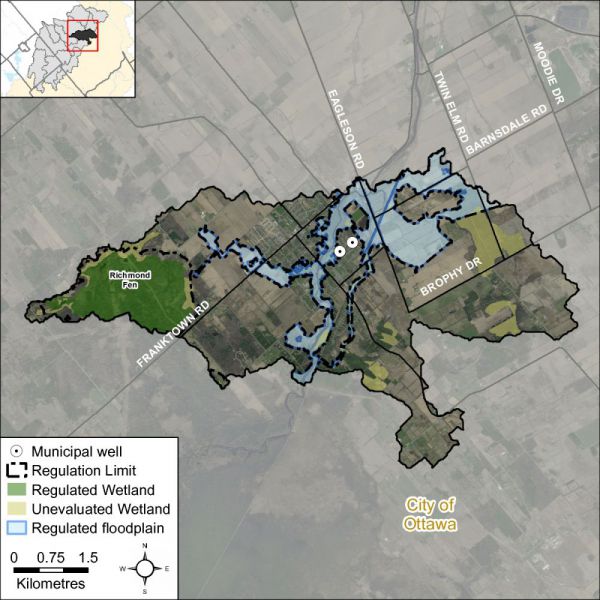 The Wellhead Protection Area around the Richmond (King’s Park) drinking water source is located within the Jock River-Richmond drainage catchment. This area is subject to mandatory policies in the Mississippi-Rideau Source Protection Plan developed under the Clean Water Act. These policies specifically regulate land uses and activities that are considered drinking water threats, thereby reducing the risk of contamination of the municipal drinking water source.

The Jock River-Richmond drainage catchment is also considered to have a Highly Vulnerable Aquifer. This means that the nature of the overburden (thin soils, fractured bedrock) does not provide a high level of protection for the underlying groundwater making the aquifer more vulnerable to contaminants released on the surface. The Mississippi-Rideau Source Protection Plan includes policies that focus on the protection of groundwater region-wide due to the fact that most of the region, which encompasses the Mississippi and Rideau watersheds, is considered Highly Vulnerable Aquifer.