Surface water quality conditions in the Monahan Drain catchment are monitored by the City of Ottawa’s Baseline Water Quality Monitoring Program. This program provides information on the condition of Ottawa’s surface water resources; data is collected for multiple parameters including nutrients (total phosphorus, total Kjeldahl nitrogen and ammonia), E. coli, metals (like aluminum and copper) and additional chemical/physical parameters (such as alkalinity, chlorides, pH and total suspended solids). The locations of monitoring sites are shown in Figure 2 and Table 1. 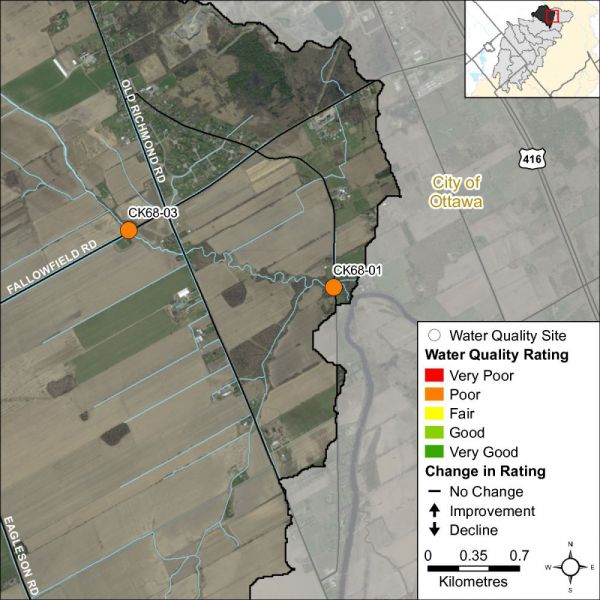 The RVCA's water quality rating for the Monahan Drain sites (CK68-01 and CK68-03) are “POOR” (Table 1) as determined by the Canadian Council of Ministers of the Environment (CCME) Water Quality Index[1]. A “POOR” rating indicates that water quality is frequently threatened or impaired; conditions often depart from natural or desirable levels. Each parameter is evaluated against established guidelines to determine water quality conditions. Those parameters that frequently exceed guidelines are presented below. Table 1 shows the overall rating for the monitored surface water quality sites within the Monahan Drain catchment and Table 2 outlines the Water Quality Index (WQI) scores and their corresponding ratings.

There are two monitored water quality sites on the Monahan Drain in this catchment (CK68-01 and CK68-03, Figure 2). There is limited data prior to 2010, therefore only data from the 2010-2015 period will be presented in the following. Water quality scores at both sites is reported as “Poor” (Table 1). The scores at these sites are largely influenced by frequent high nutrient concentrations, bacterial pollution, occasional metal exceedances and elevated chloride levels. For more information on the CCME WQI, please see the Jock River Subwatershed Report.

Tables 3, 4 and 5 summarize average nutrient concentrations at monitored sites within the Jock River-Barrhaven catchment and show the proportion of results that meet the guidelines.

The majority of samples at site CK68-01 were above the TP guideline in the 2010-2015 monitoring period.  There were no samples below the guideline (Figure 3) and the average concentration was 0.108 mg/l.

TKN concentrations show that the bulk of results exceeded the guideline (Figure 4); there were few samples (two percent) in the 2010-2015 period. The average concentration was elevated at 0.851 mg/l (Table 4).

Elevated TP results were also common occurrence at site CK68-03. There were no TP results below the guideline in the 2010-2015 period (Figure 3).  The average TP concentration was well above the PWQO guideline at 0.140 mg/l (Table 3).

Similar to TP results, all samples analyzed for TKN have exceeded the guideline (Figure 4). The average concentration was 1.115 mg/l (Table 4).

The results for NH3 indicate that exceedances were common. Twelve percent of samples were below the guideline in the 2010-2015 period (Figure 5). The average NH3 concentration was 0.399 mg/l (Table 5). 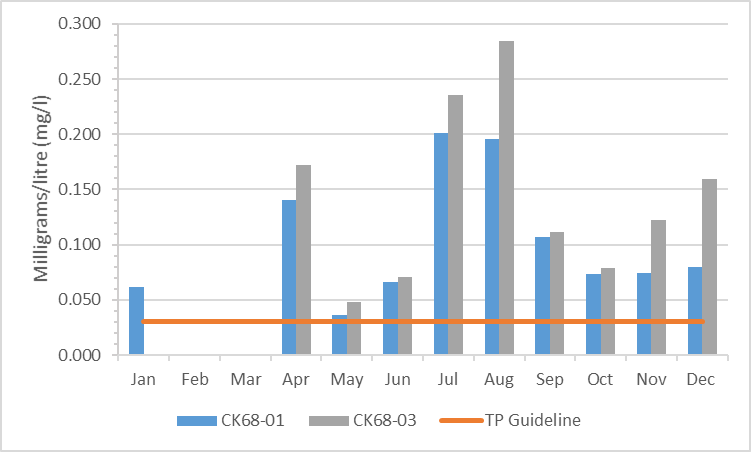 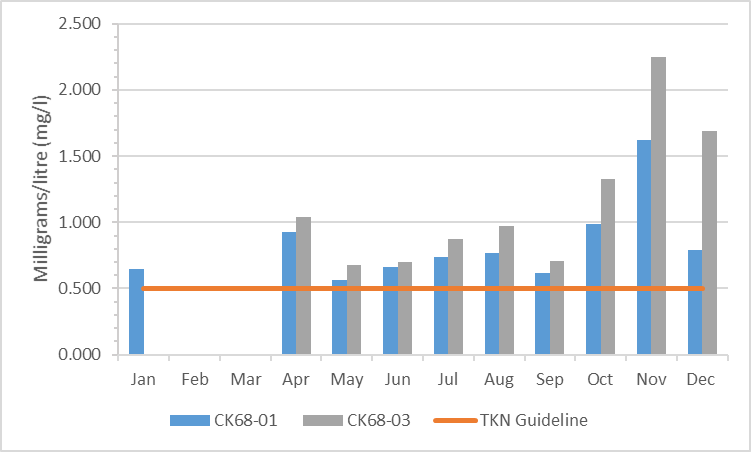 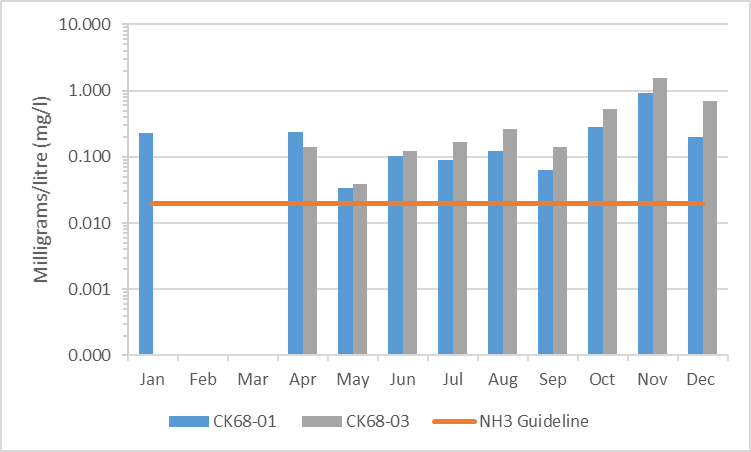 Nutrient enrichment is a feature in the monitored portions of the Monahan Drain. Overall, average nutrient concentrations are very high with very few results below established guidelines. All parameters (total phosphorus, total Kjeldahl nitrogen and ammonia) are above guidelines at each site.  Elevated nutrients may result in nutrient loading to the Jock River. High nutrient concentrations can help stimulate the growth of algae blooms and other aquatic vegetation in a waterbody and deplete oxygen levels as the vegetation dies off. Best management practices such as minimizing storm water runoff, enhanced shoreline buffers, preventing fertilizer runoff and restricting cattle access in upstream agricultural areas can help to reduce nutrient enrichment in the Jock River.

Table 6 summarizes the geometric mean[3] for the monitored sites on the Jock River within the Barrhaven catchment and shows the proportion of samples that meet the E. coli guideline of 100 CFU/100 ml. The results of the geometric mean with respect to the guideline is shown in Figure 6.

E. coli counts at site CK68-01 indicate bacterial pollution at this site is common, the majority of results exceeded the PWQO with 43 percent of samples below the guideline (Figure 6). The count at the geometric mean was 125 CFU/100ml (Table 6).

Elevated E. coli counts at site CK68-03 were also a regular occurrence. The majority of samples (51 percent) were below the guideline (Figure 6).  The geometric mean was just above the PWQO at 101 CFU/100ml (Table 6). 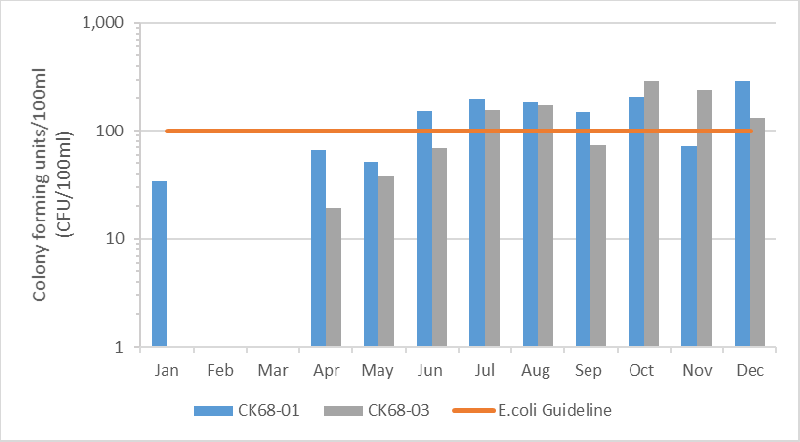 Bacterial pollution appears to be a significant concern in Monahan Drain.  Both sites (CK68-01 and CK68-03) have regular exceedances and counts at the geometric mean are above the guideline of 100 CFU/100ml. Best management practices such as restricting livestock assess and minimizing runoff should be employed wherever possible to protect water quality conditions in this tributary and downstream impacts on the Jock River.

Of the metals routinely monitored in the Monahan Drain, aluminum (Al) regularly reported concentrations above the respective PWQO. In elevated concentrations, these metals can have toxic effects on sensitive aquatic species.

Table 7 summarize metal concentrations at sites CK68-01 and CK68-03, and show the proportion of samples that meet guidelines. Figure 7 shows Al concentration with respect to the guideline of 0.075 mg/l for 2010-2015 period.

Results from site show elevated Al concentrations are also a concern further upstream. Only 34 percent of samples were below the guideline (Figure 7). The average concentration of Al was 0.385 mg/l (Table 7). 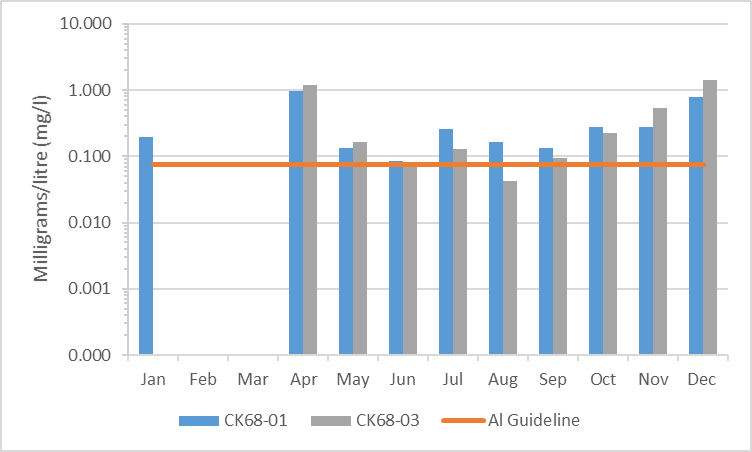 In the Monahan Drain catchment aluminum concentrations have increased at both sites, CK68-01 and CK68-03.  Increased concentrations appear to be more common during the spring and fall and therefore may be due to increased runoff from rainfall/meltwater. Efforts should continue to be made to identify pollution sources and implement best management practices to reduce any inputs such as storm water runoff, metal alloys from vehicle traffic, fungicides and pesticides to improve overall stream health and lessen downstream impacts.

Chloride is a naturally occurring component of surface water.  However, it has been shown to an indicator of increasing urbanization due to runoff from road salt application and can impact sensitive aquatic species.  Of all the sites monitored in the Jock River subwatershed the two sites on the Monahan Drain were the only locations that had the majority of samples above the chloride guideline of 120 mg/l.

Results from site show elevated chloride concentrations are also a concern further upstream. Only 22 percent of samples were below the guideline (Figure 8). The average concentration was 99 mg/l (Table 7). 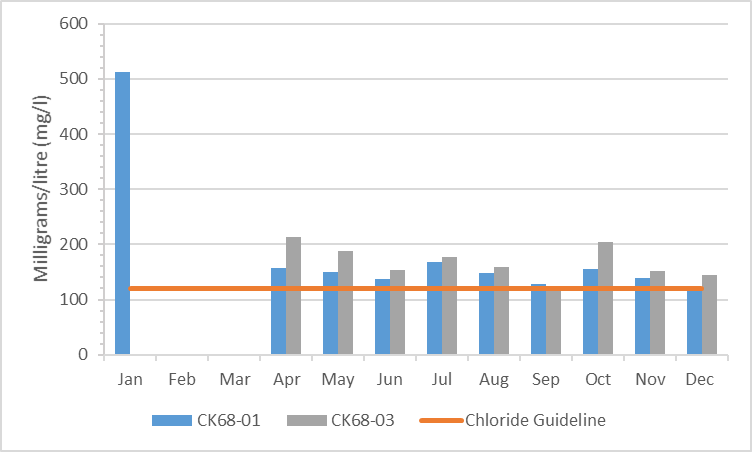 In the Monahan Drain catchment there is evidence of elevated chloride concentrations at both sites, CK68-01 and CK68-03. The concentrations tend to be elevated regardless of the season, (please note the result for January in Figure 8 is based on a single sample value). As this is a highly altered feature in a agricultural area, it is likely to be impacted by local land uses.  Further investigation is perhaps warranted to see if the outflow has an impact on the Jock River.

1 The City of Ottawa Baseline Water Quality Monitoring Program has also applied the CCME WQI to monitored sites.  The parameters used in the index and time periods differs between the RVCA and City of Ottawa’s application of the index, thus in same cases has resulted in different ratings

3 A type of mean or average, which indicates the central tendency or typical value of a set of numbers by using the product of their values (as opposed to the arithmetic mean which uses their sum). It is often used to summarize a variable that varies over several orders of magnitude, such as E. coli counts