The RVCA and its partners are working to protect and enhance environmental conditions in the Middle Rideau Subwatershed. Figure 53 shows the location of all stewardship projects completed in the Irish Creek catchment along with sites identified for potential shoreline restoration.

From 2009 to 2014, four septic system replacements, two well decommissionings, two well replacements and one education initiative were completed. Between 2003 and 2008, one septic system replacement, one well decommissioning, one clean water diversion and one fuel storage and handling facility were carried out along with one livestock fencing project prior to 2003. Total value of all 14 projects is $100,445 with $33,009 of that amount funded through grant dollars from the RVCA. 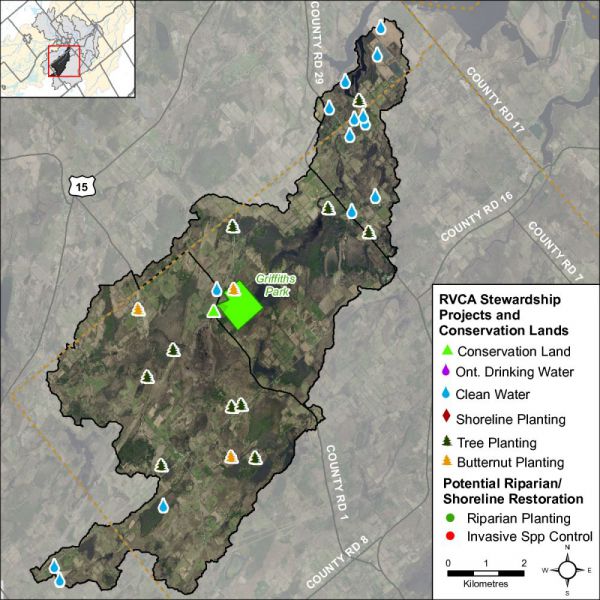 Through the RVCA Butternut Recovery Program, an additional 75 butternut trees were planted in the Irish Creek catchment between 2003 and 2014, as part of efforts to introduce healthy seedlings from tolerant butternuts into various locations across Eastern Ontario.

With the assistance of the RVCA’s Shoreline Naturalization Program, 430 trees and shrubs were planted at one project location to create a 120 metre long shoreline buffer at a total project value of $1,068.

The Irish Creek catchment covers 161 square kilometres with 38.3 square kilometres (or 24 percent) of the drainage area being within the regulation limit of Ontario Regulation 174/06 (Figure 54), giving protection to wetland areas and river or stream valleys that are affected by flooding and erosion hazards.

Wetlands occupy 32.7 sq. km. (or 20 percent) of the catchment. Of these wetlands, 20.5 sq. km (or 63 percent) are designated as provincially significant and included within the RVCA regulation limit. This leaves the remaining 12.1 sq. km (or 37 percent) of wetlands in the catchment outside the regulated area limit.

Of the 232.6 kilometres of stream in the catchment, regulation limit mapping has been plotted along 103.4 kilometers of streams (representing 44 percent of all streams in the catchment). Some of these regulated watercourses (81.5 km or 35 percent of all streams) flow through regulated wetlands; the remaining 21.9 km (or 21 percent) of regulated streams are located outside of those wetlands. Plotting of the regulation limit on the remaining 129.2 km (or 56 percent) of streams requires identification of flood and erosion hazards and valley systems. 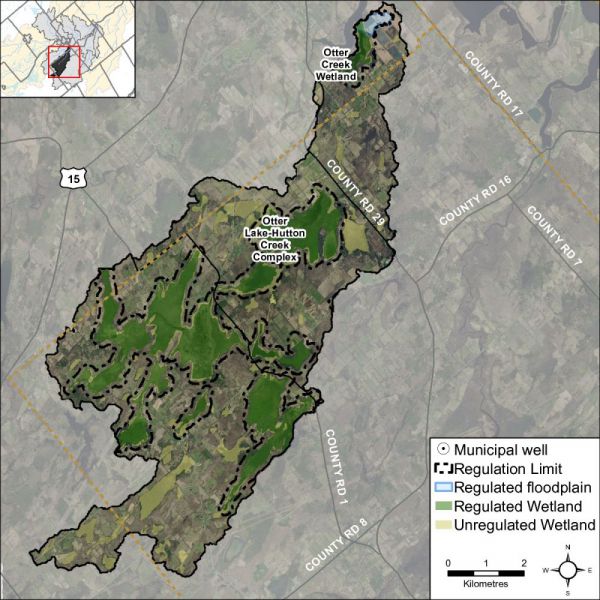