Land cover and any change in coverage that has occurred over a six year period is summarised for the Otty Lake catchment using spatially continuous vector data representing the catchment during the spring of 2008 and 2014. This dataset was developed by the RVCA through heads-up digitization of 20cm DRAPE ortho-imagery at a 1:4000 scale and details the surrounding landscape using 10 land cover classes.

As shown in Table 14 and Figure 1 (see the Introduction section of this report), the dominant land cover type in 2014 is woodland.

From 2008 to 2014, there was an overall change of 11 hectares (from one land cover class to another). Most of the change in the Otty Lake catchment is a result of the conversion of crop and pastureland, meadow-thicket and woodland to settlement (Figure 66). 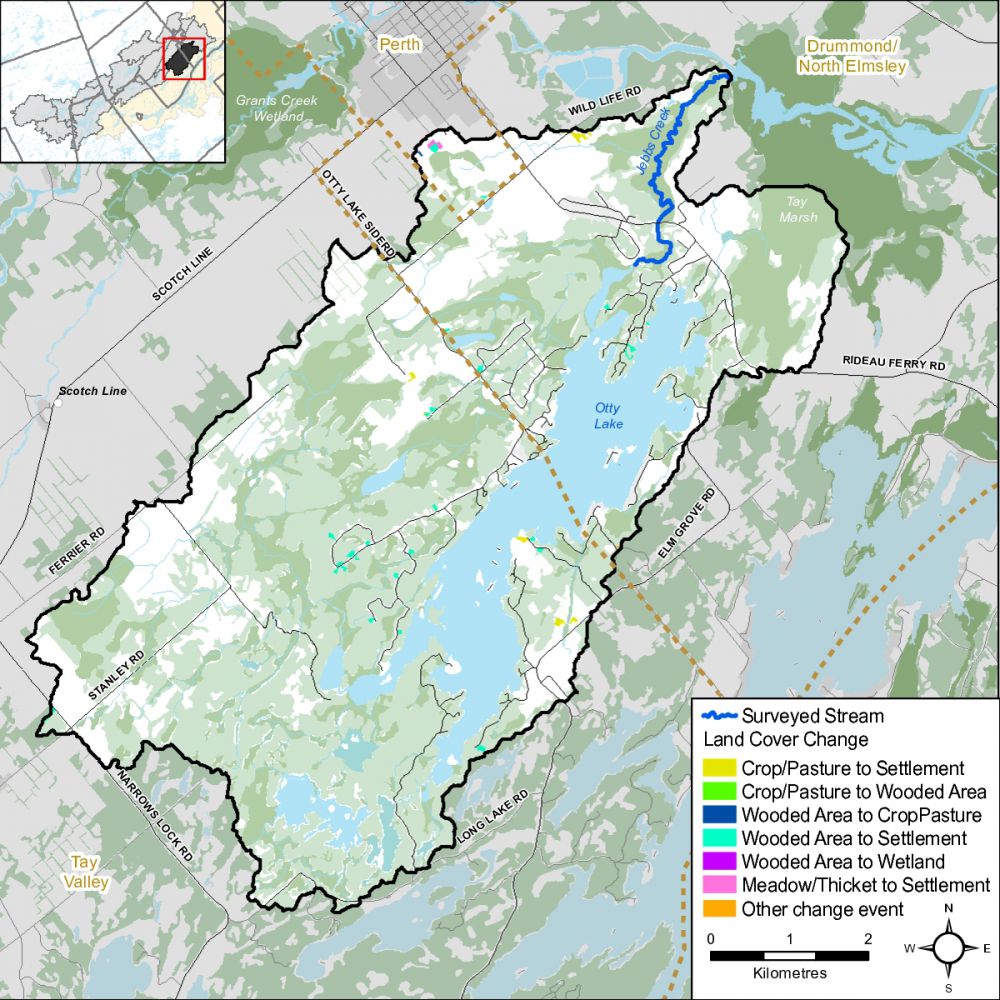 Table 15 provides a detailed breakdown of all land cover change that has taken place in the Otty Lake catchment between 2008 and 2014.

The Guideline also notes that forests provide a great many habitat niches that are in turn occupied by a great diversity of plant and animal species. They provide food, water and shelter for these species - whether they are breeding and resident locally or using forest cover to help them move across the landscape. This diversity of species includes many that are considered to be species at risk. Furthermore, from a wildlife perspective, there is increasing evidence that the total forest cover in a given area is a major predictor of the persistence and size of bird populations, and it is possible or perhaps likely that this pattern extends to other flora and fauna groups. The overall effect of a decrease in forest cover on birds in fragmented landscapes is that certain species disappear and many of the remaining ones become rare, or fail to reproduce, while species adapted to more open and successional habitats, as well as those that are more tolerant to human-induced disturbances in general, are able to persist and in some cases thrive. Species with specialised habitat requirements are most likely to be adversely affected. The overall pattern of distribution of forest cover, the shape, area and juxtaposition of remaining forest patches and the quality of forest cover also play major roles in determining how valuable forests will be to wildlife and people alike.

As shown in Figure 67, 41 percent of the Otty Lake catchment contains 2133 hectares of upland forest and 42 hectares of lowland forest (treed swamps) versus the 47 percent of woodland cover in the Tay River subwatershed. This is greater than the 30 percent of forest cover that is identified as the minimum threshold required to sustain forest birds according to the Guideline and which may only support less than one half of potential species richness and marginally healthy aquatic systems. When forest cover drops below 30 percent, forest birds tend to disappear as breeders across the landscape. 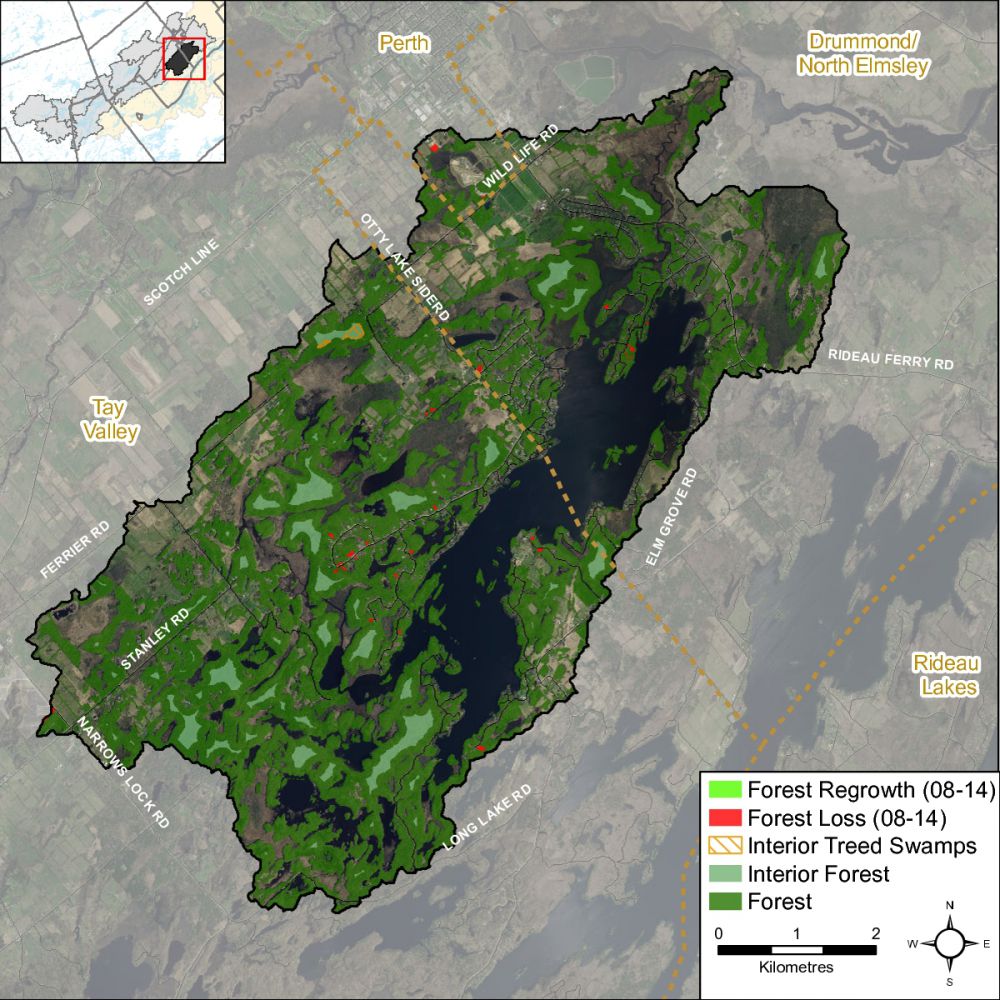 The Environment Canada Guideline also notes that for forest plants that do not disperse broadly or quickly, preservation of some relatively undisturbed large forest patches is needed to sustain them because of their restricted dispersal abilities and specialised habitat requirements and to ensure continued seed or propagation sources for restored or regenerating areas nearby.

In the Otty Lake catchment (in 2014), one hundred and forty-eight (52 percent) of the 285 woodland patches are very small, being less than one hectare in size. Another 121 (42 percent) of the woodland patches ranging from one to less than 20 hectares in size tend to be dominated by edge-tolerant bird species. The remaining 16 (six percent of) woodland patches range between 22 and 709 hectares in size. Thirteen of these patches contain woodland between 20 and 100 hectares and may support a few area-sensitive species and some edge intolerant species, but will be dominated by edge tolerant species.

Conversely, three (one percent) of the 285 woodland patches in the drainage area exceed the 100 plus hectare size needed to support most forest dependent, area sensitive birds and are large enough to support approximately 60 percent of edge-intolerant species. One patch tops 200 hectares, which according to the Environment Canada Guideline will support 80 percent of edge-intolerant forest bird species (including most area sensitive species) that prefer interior forest habitat conditions.

Table 16 presents a comparison of woodland patch size in 2008 and 2014 along with any changes that have occurred over that time. A decrease (of seven hectares) has been observed in the overall woodland patch area between the two reporting periods with most change occurring in the 1 to 20 woodland patch size class range.

In the Otty Lake catchment (in 2014), the 285 woodland patches contain 26 forest interior patches (Figure 67) that occupy three percent (147 ha.) of the catchment land area (which is less than the five percent of interior forest in the Tay River Subwatershed). This is below the ten percent figure referred to in the Environment Canada Guideline that is considered to be the minimum threshold for supporting edge intolerant bird species and other forest dwelling species in the landscape.

Historically, the overall wetland coverage within the Great Lakes basin exceeded 10 percent, but there was significant variability among watersheds and jurisdictions, as stated in the Environment Canada Guideline. In the Rideau Valley Watershed, it has been estimated that pre-settlement wetland cover averaged 35 percent using information provided by Ducks Unlimited Canada (2010) versus the 21 percent of wetland cover existing in 2014, derived from DRAPE imagery analysis. 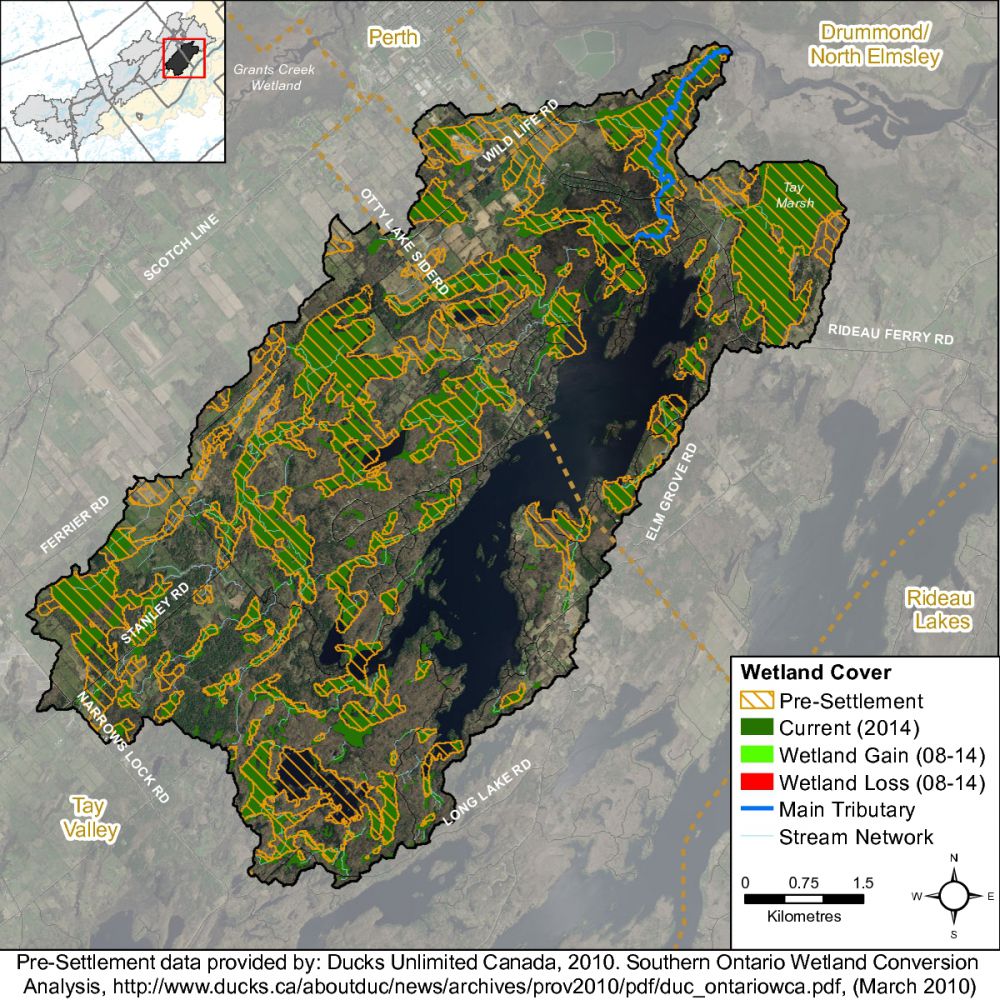 This decline in wetland cover is also evident in the Otty Lake catchment (as seen in Figure 68 and summarised in Table 18), where wetland was reported to cover 31 percent of the area prior to settlement, as compared to 21 percent in 2014. This represents a 31 percent loss of historic wetland cover. To maintain critical hydrological, ecological functions along with related recreational and economic benefits provided by these wetland habitats in the catchment, a “no net loss” of currently existing wetlands should be employed to ensure the continued provision of tangible benefits accruing from them to landowners and surrounding communities.

Figure 69 shows the extent of the ‘Natural’ vegetated riparian zone (predominantly wetland/woodland features) and ‘Other’ anthropogenic cover (crop/pastureland, roads/railways, settlements) along a 30-metre-wide area of land around Otty and McLaren Lake, other lakes and along both sides of the shoreline of Jebbs Creek and the many unnamed watercourses (including headwater streams) found in the Otty Lake catchment. 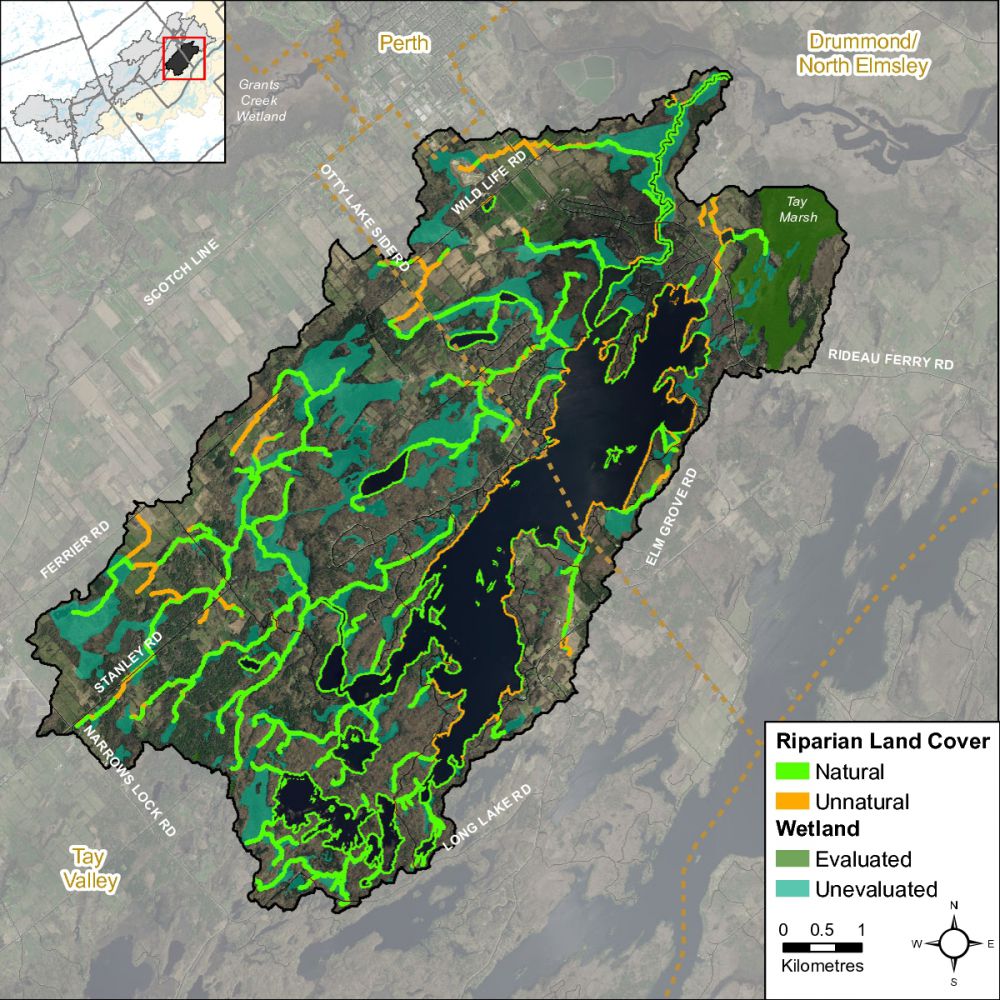 Additional statistics for the Otty Lake catchment are presented in Tables 19 to 23 and show that there has been little to no change in shoreline cover from 2008 to 2014.