The RVCA and its partners are working to protect and enhance environmental conditions in the Tay River Watershed. Figure 119 shows the location of all stewardship projects completed in the Christie Lake catchment. 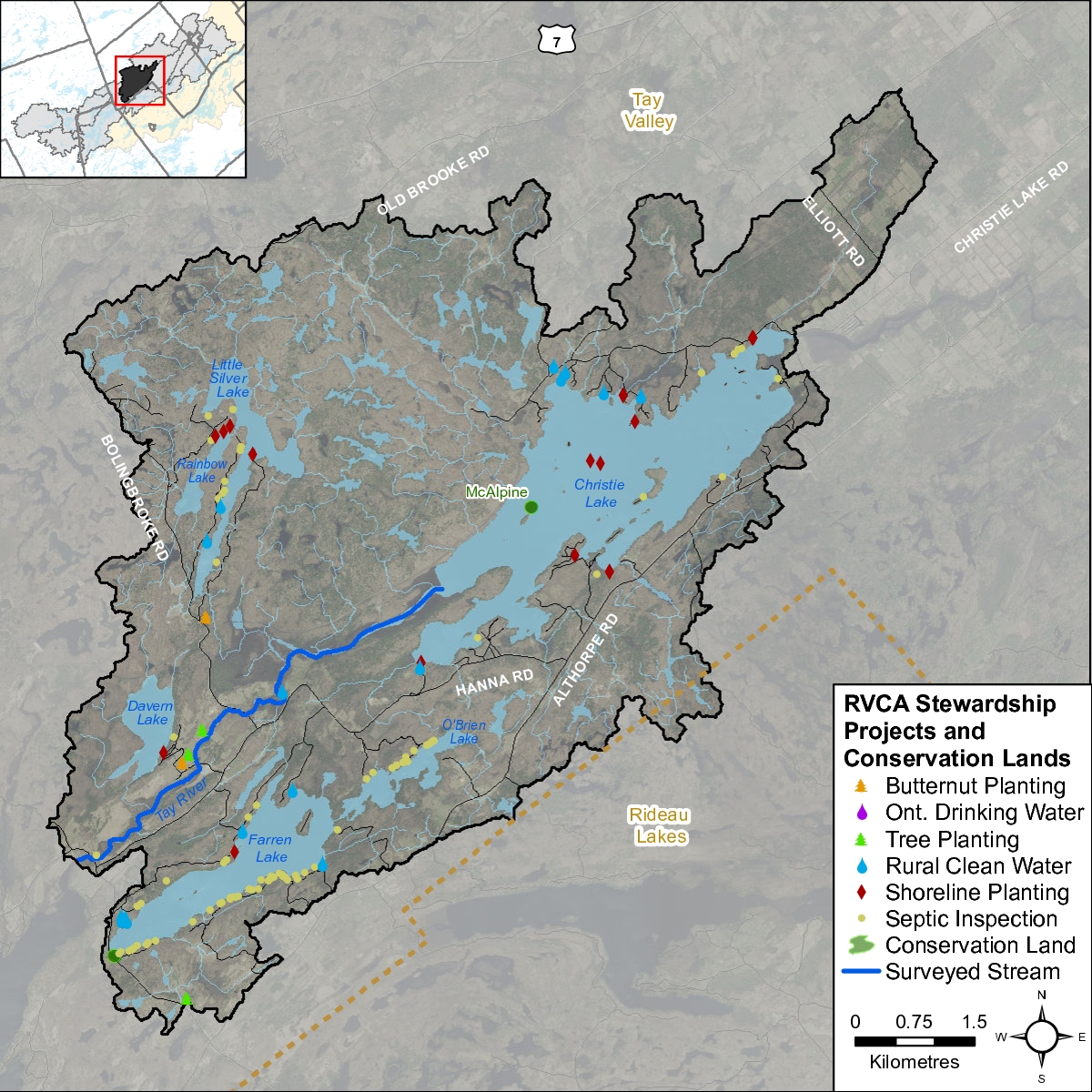 The Rural Clean Water Program provides technical and financial assistance to farmers and other rural landowners, to aid in the implementation of projects that protect water quality. Funding is granted to those projects that support best management practices for application in the protection and improvement of surface and ground water resources.  The program also supports climate change adaptation and low impact development projects as well as educating rural landowners about environmental stewardship of private property. Examples of supported projects include livestock exclusion fencing, controlled tile drainage, cover crops, erosion control, well related projects, and many more. For a list of eligible projects and to apply for funding, see Rural Clean Water.

In the Christie Lake catchment from 2011 to 2016, six septic system repairs, one well upgrade, one well decommissioning and one livestock fencing project were completed; prior to this, four septic system repairs, one well decommissioning, one well replacement and one well upgrade had been completed. When combined, these projects are keeping 46.77 kilograms of Phosphorus out of our lakes, rivers and streams every year. Total value of all 16 projects is $121,097 with $16,781 of that amount funded through grant dollars from the RVCA.

Forest cover and tree planting continues to be one of the most widely supported strategies to improve our environment. The many benefits of forest cover include carbon sequestration, flood mitigation and water quality improvement as well as providing wildlife habitat.

Through the RVCA's Trees for Tomorrow Program (and its predecessors), 10,550 trees were planted at two sites from 2011 to 2016; prior to this, 1,000 trees were planted at one other site. In total, 11,550 trees have been planted resulting in the reforestation of six hectares. Total project value of all three projects in the Christie Lake catchment is $23,189 with $18,786 of that amount coming from fundraising sources. For more information about the Program and landowner eligibility, please see the following: Tree Planting in the Rideau Valley Watershed and Trees for Tomorrow.

An additional 20 butternut trees were planted through the RVCA Butternut Recovery Program as part of efforts to introduce healthy seedlings from tolerant butternuts into various locations across Eastern Ontario.

Though the RVCA’s Shoreline Naturalization Program, landowners (private and public property owners) have naturalized more than 2.3 km of shoreline in the Tay Watershed by planting over 10,563 native trees and shrubs at 96 sites since 2008. The total value of these projects is $126,000.

In the Chrisite Lake catchment, a total of 1,669 native trees and shrubs have been planted along 582 metres of shoreline at an average buffer width of three metres for a total project value of $28,794.

A number of these projects have been undertaken in partnership with community groups. In 2009 and 2010, the RVCA partnered with the Christie Lake Association to distribute 500 native tree, shrubs and wildflowers to property owners around Christie Lake. In 2014 and  2015, a shoreline restoration project was completed at Camp Opemikon with volunteer assistance from Scouts Canada. Site conditions before and after planting are shown in the photos below. 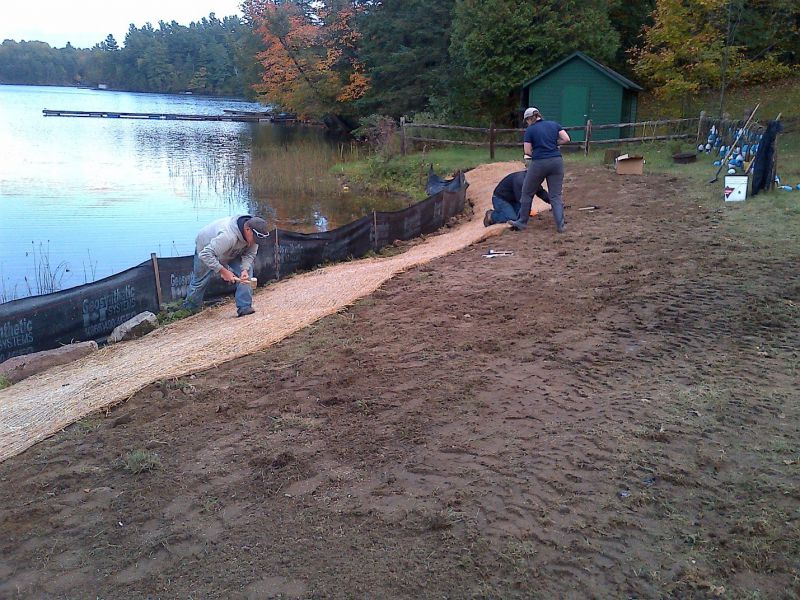 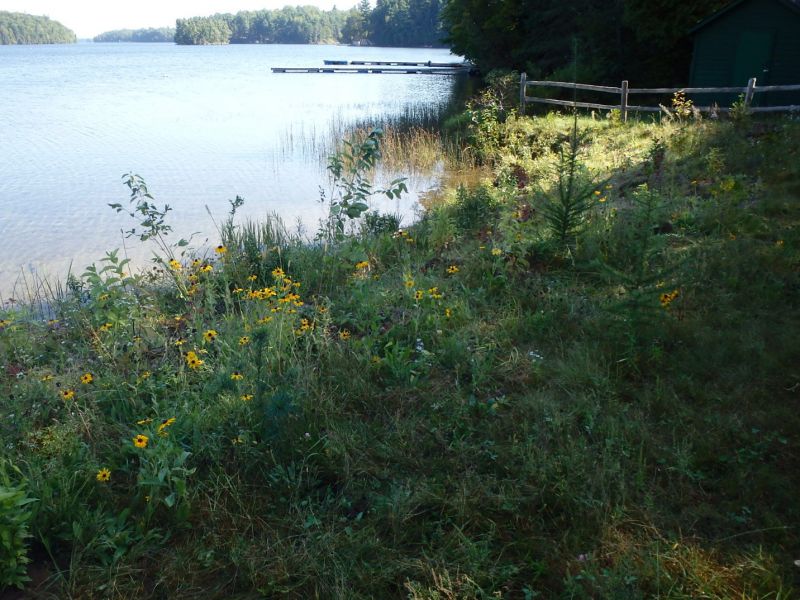 Since 2013, the Christie Lake Association (CLA) has been placing artificial fish habitat along selected shorelines around Christie Lake. Often referred to as a “Fishsticks” program, it involves the placement of submerged trees along inactive or remote shorelines to provide enhanced aquatic habitat for a variety of fish species as well as other invertebrates, amphibians and reptiles. Trees that have fallen or were cut down by their owners are floated to secluded locations around the lake and anchored to rocks or trees on the shore. These trees slowly submerge to form great subsurface habitats.

In the summer and fall of 2015, the CLA began another fish habitat project to construct “Brushbundles” which are assembled and secured with wire or cable and then anchored and submerged on the bottom of the lake in areas deeper than five meters. The idea is to provide improved fish habitat, in particular a place for young-of–the-year to hang out and avoid predators, similar to the "Fishsticks" initiative. This work was carried out by keen volunteers from around Christie Lake and Venturer Scouts from Camp Opemikon. On five separate occasions, volunteers deployed bundles at 15 locations, mostly in the north and west sectors of the lake (Figure 120). Financial assistance to buy supplies was secured through a Fisheries and Oceans grant submitted in partnership with the Lanark County Stewardship Council, Watersheds Canada and the Rideau Valley Conservation Authority. A "Brushbundles" post effectiveness monitoring video was filmed by the RVCA on June 9, 2017 and shows the diversity of underwater flora and fauna resulting from the project. 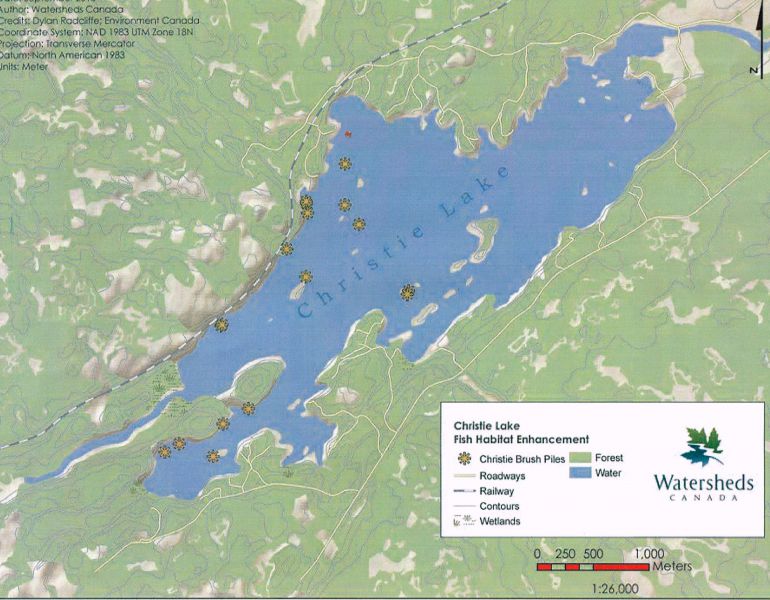 Septic system re-inspection is provided by the RVCA through the Mississippi Rideau Septic System Office at the request of Tay Valley Township.

Since 2004, the service has performed 510 mandatory and voluntary septic system re-inspections in the Christie Lake catchment.

Of the 342 re-inspections performed on Christie and Farren Lakes and 126 re-inspections conducted on Little Silver and Rainbow Lakes, remedial/maintenance work (i.e. pump outs and baffle replacements that generally do not require a permit) was advocated for 126 septic systems,  septic system replacements required at another nine properties along with 15 additional landowners requesting more information about their septic systems.

Another 42 re-inspections were carried out on Davern and O'Brien Lakes as well as on properties along the Tay River. Three septic systems required remedial/maintenance work, three more landowners needed information about their septic systems and none of the inspections identified the need to replace any of the existing systems.

The Christie Lake catchment covers 65.3 square kilometres with 0.5 square kilometres (or 0.8 percent) of the drainage area being within the regulation limit of Ontario Regulation 174/06 (Figure 121), giving protection to wetland areas and river or stream valleys that are affected by flooding and erosion hazards.

Wetlands occupy nine square kilometres (or 13.7 percent) of the catchment. Of these wetlands, 1.2 square kilometres (or 13 percent) are designated as provincially significant (Christie Lake Wetland) and not included within the RVCA regulation limit. All wetlands in the catchment are outside the regulated area limit administered by the Rideau Valley Conservation Authority..

Within those areas of the Christie Lake catchment subject to the regulation (limit), efforts (have been made and) continue through RVCA planning and regulations input and review to manage the impact of development (and other land management practices) in areas where “natural hazards” are associated with rivers, streams, valley lands and wetlands. For areas beyond the regulation limit, protection of the catchment’s watercourses is only provided through the “alteration to waterways” provision of the regulation. 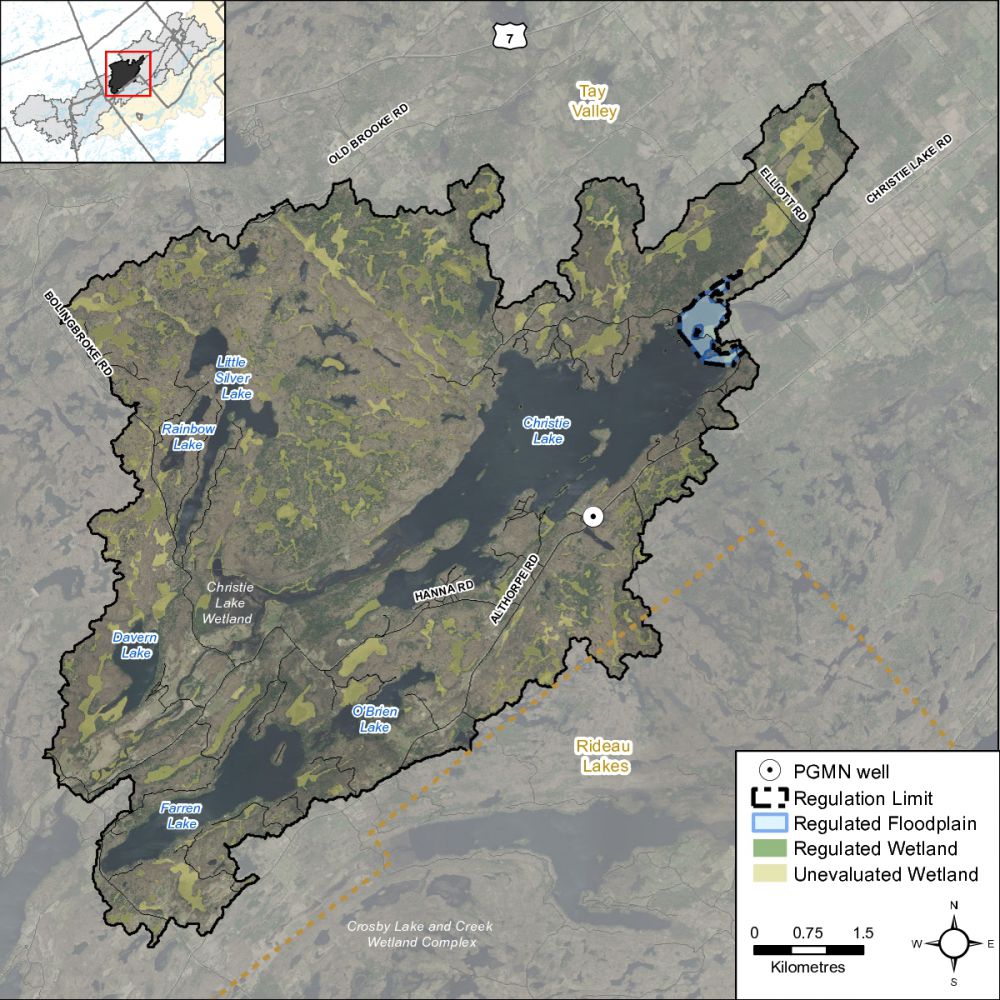 Mississippi-Rideau Source Water Protection Program has mapped only two small areas of the Christie Lake catchment as a Significant Groundwater Recharge Areas and all of the catchment as a Highly Vulnerable Aquifer. This means that the nature of the overburden (thin soils, fractured bedrock) does not provide a high level of protection for the underlying groundwater making the aquifer more vulnerable to contaminants released on the surface. There are no Well-Head Protection Areas in the catchment.