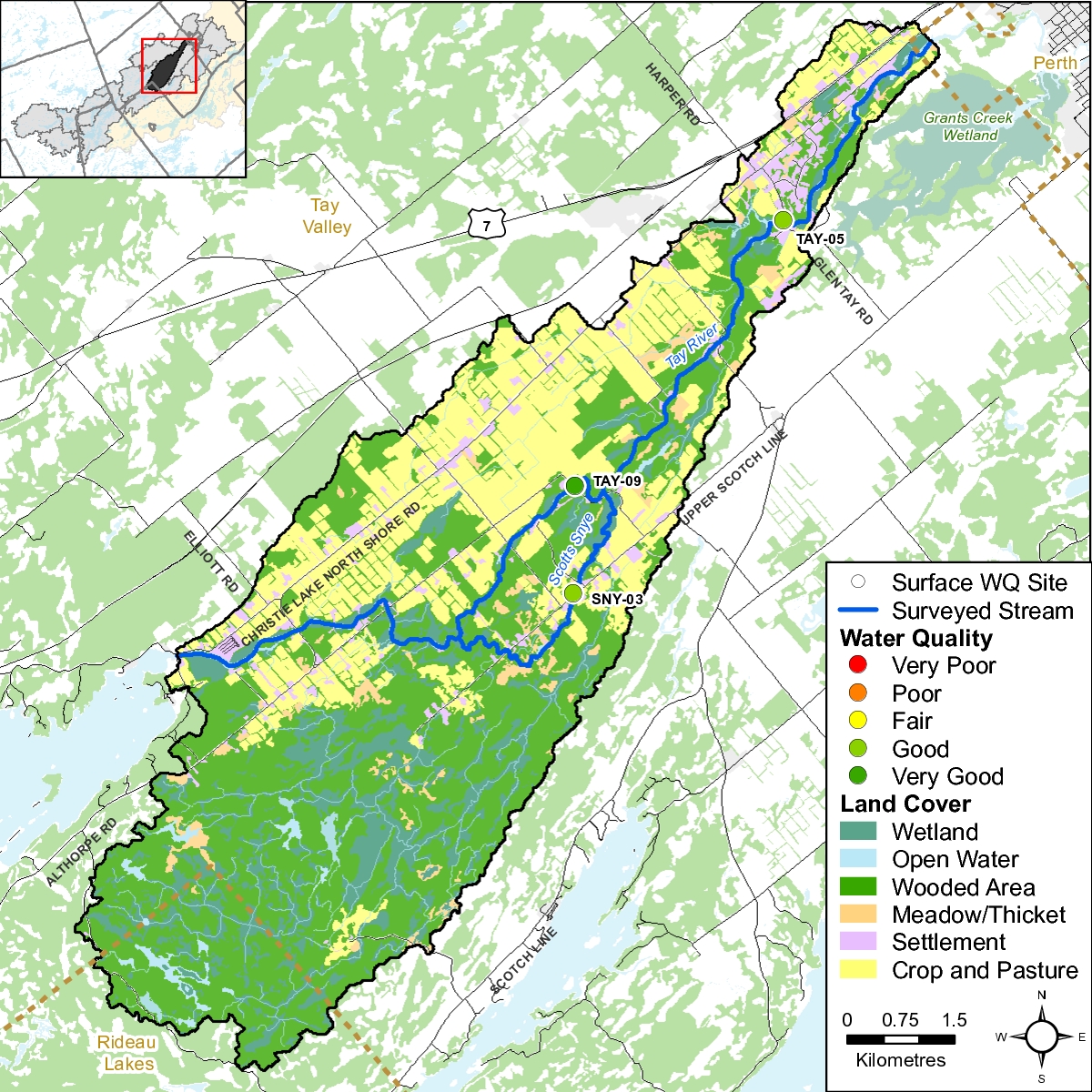 There are three monitored water quality sites in the Glen Tay Catchment; two are on the Tay River (TAY-09 and TAY-05) and one site (SNY-03) is on a side channel of the main river known as Scotts Snye (Figure 2). The RVCA's water quality rating at the two Tay River sites was reported as "Good" and "Very Good" (Table 1), while the site on the Scotts-Snye reach was reported as "Good", as determined by the Canadian Council of Ministers of the Environment (CCME) Water Quality Index.

"Good" indicates that only a minor degree of threat or impairment is observed and conditions rarely depart from natural or desirable levels. “Very Good" indicates water quality is protected with a virtual absence of threat or impairment; conditions are very close to natural or pristine levels. Each parameter is evaluated against established guidelines to determine water quality conditions. Those parameters that frequently exceed guidelines are presented below. Data has been analyzed over the 2006-2017 period for general trends and conditions. Table 1 shows the overall rating for the monitored surface water quality sites within the catchment and Table 2 outlines the Water Quality Index (WQI) scores and their corresponding ratings.

Tables 3 and 4 summarize average nutrient concentrations at monitored sites within the Glen Tay catchment and show the proportion of results that meet the guidelines.

TKN concentrations show that the bulk of results (96 percent) were also below the guideline (Figure 6, Table 4). The average concentration over the 2006-2017 period was 0.400 mg/l (Table 4); monthly averages are comparable across the sampling season with the lowest concentrations observed in April and November (Figure 5).  There was no significant trend found in TKN results at this site.

Site TAY-05 is downstream of TAY-09 and the inflow from the Scotts-Snye side channel of the Tay River. TP results were low, the average concentrations was 0.015 and 97 percent of samples were below the guideline (Table 3, Figure 4).  Monthly TP concentrations followed a similar pattern to upstream site TAY-09, though were consistently higher (Figure 3). A declining trend in TP concentrations was also observed in the data from this site.

The majority of TKN results were below the guideline (Figure 5 and 6), 81 percent of samples were below 0.500 mg/l (TKN Guideline) with an average concentration of 0.438 mg/l (Table 4). Average monthly concentrations were comparable and also followed a similar pattern to TAY-09 (Figure 5). No significant trend was observed in the 2006-2017 TKN dataset. 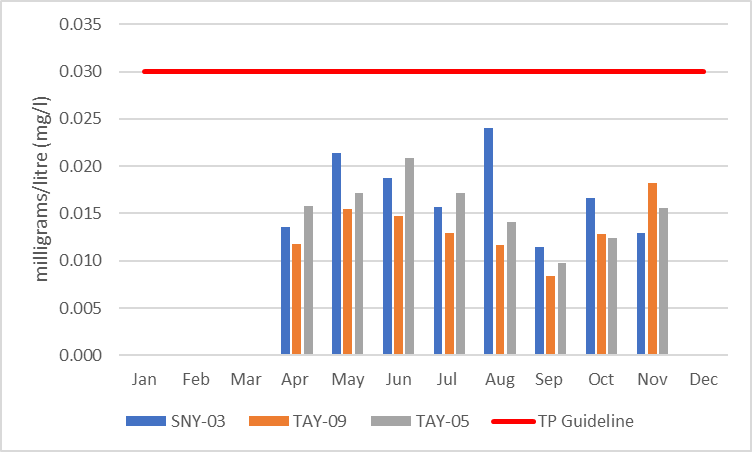 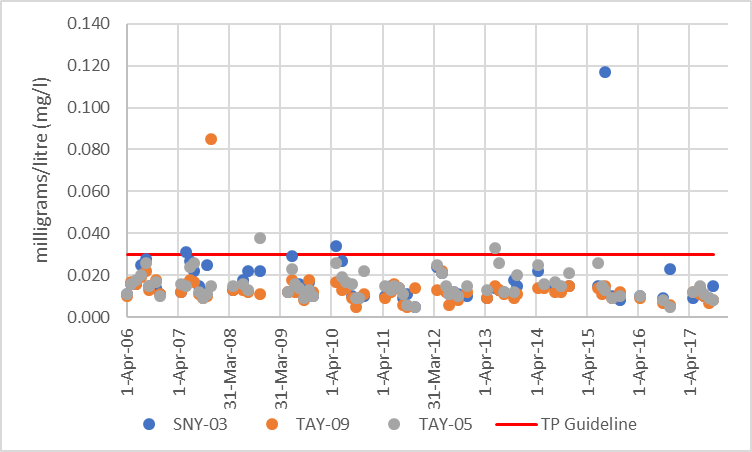 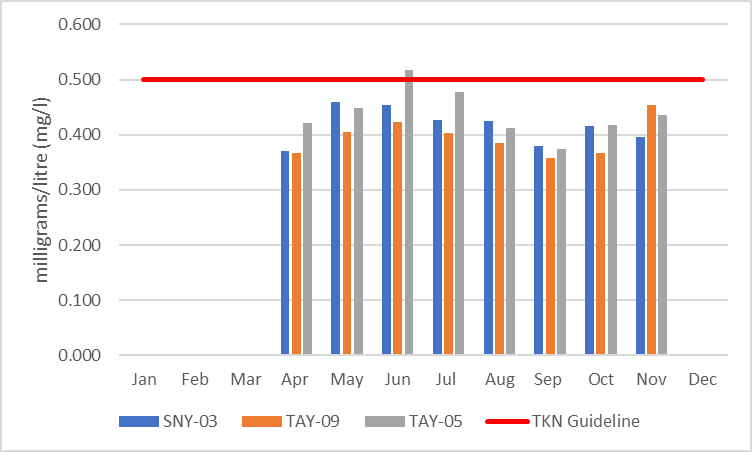 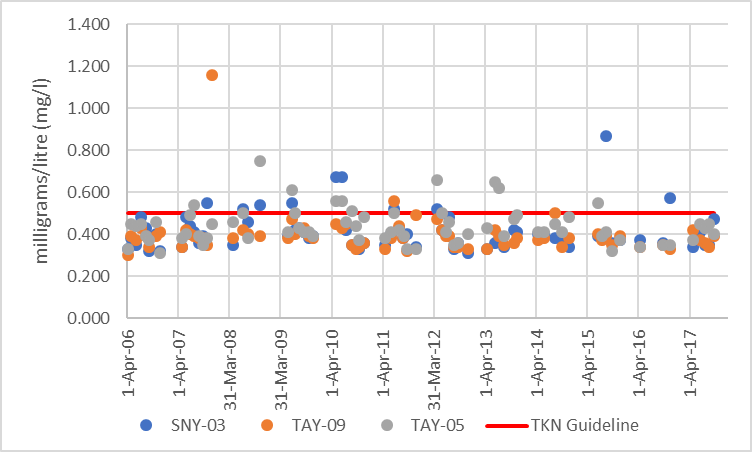 The data collected in this catchment provides evidence that nutrient enrichment is not a significant concern in this reach of the Tay River.  Overall, the increase in TP and TKN concentrations from TAY-09 to TAY-05 show that some nutrient enrichment does occur downstream, however a declining trend in TP concentrations was noted at all sites. This provides support that cumulative changes throughout the catchment has reduced nutrient concentrations. This should be taken as a positive sign as high nutrient concentrations can help stimulate the growth of algae blooms and other aquatic vegetation in a waterbody and deplete oxygen levels as the vegetation dies off. It is important to continue best management practices such as minimizing storm water runoff, enhanced shoreline buffers, minimizing/discontinuing the use of fertilizers and restricting livestock access in upstream agricultural areas can help to prevent nutrient pollution and to continue to protect and enhance water quality conditions within the Tay River.

Table 5 summarizes the geometric mean[3] for the monitored sites  within the Glen Tay catchment and shows the proportion of samples that meet the E. coli guideline of 100 CFU/100 ml. The results of the geometric mean with respect to the guideline, are shown in Figures 7 and 8 respectively.

E. coli   counts at site TAY-09 indicate little concern with regard to bacterial contamination. Ninety-seven percent of samples were below the guideline (Figures 7-8) and the count at the geometric mean was only 20 CFU/100ml (Table 5). Monthly   E. coli   counts showed that the geometric mean was highest during the warmer months though all results were well below the guideline; warm water temperatures are more favourable for bacterial growth. (Figure 7).  No trend was noted in   E. coli   counts over the 2006-2017 period.

Elevated   E. coli   counts at site downstream site TAY-05 were also uncommon. Eighty-three percent of samples were below the guideline (Figure 8) from 2006-2017. The count at the geometric mean was 32 CFU/100ml (Table 5) and well below the guideline, the highest counts were recorded in June (Figure 7).  As with site TAY-09  there was no significant trend in E. coli data over the 2006-2017 period.

E. coli counts at site SNY-03 were comparable to conditions within the main channel of the Tay River (TAY-09 and TAY-05).  Eighty-seven percent of samples were below the guideline, with count of 39 CFU/100ml at the geometric mean (Table 5, Figure 8).  Monthly   E. coli   counts were below the guideline with the highest counts observed during the summer months (Figure 7). As with upstream sites no trend was noted in   E. coli   counts over the 2006-2017 period. 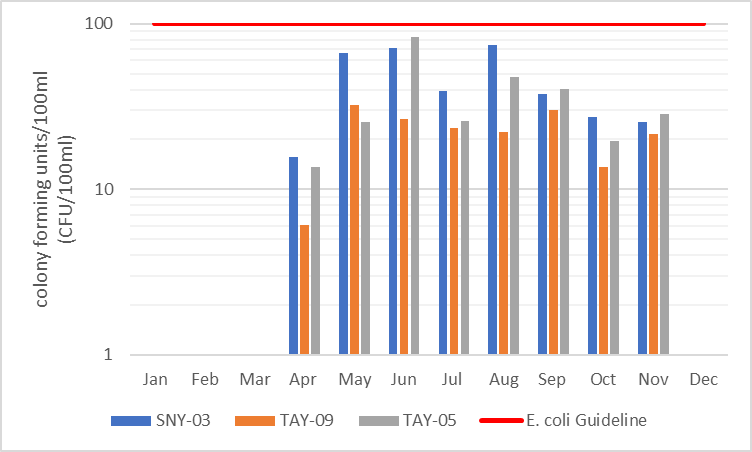 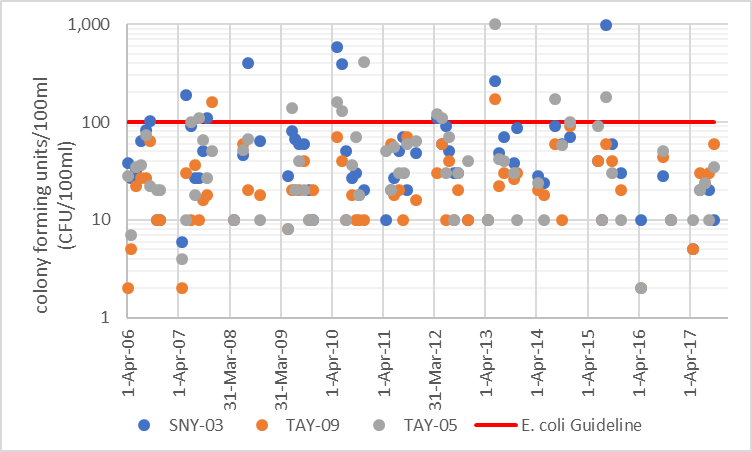 Bacterial contamination does not appear to be a significant concern in this reach of the Tay River. There are very few exceedances at all three sites and counts at the geometric mean are well below the guideline of 100 CFU/100ml. Best management practices such as enhancing shoreline buffers, limiting livestock access and minimizing runoff in both agricultural and developed areas can help to protect this reach of the Tay River into the future.