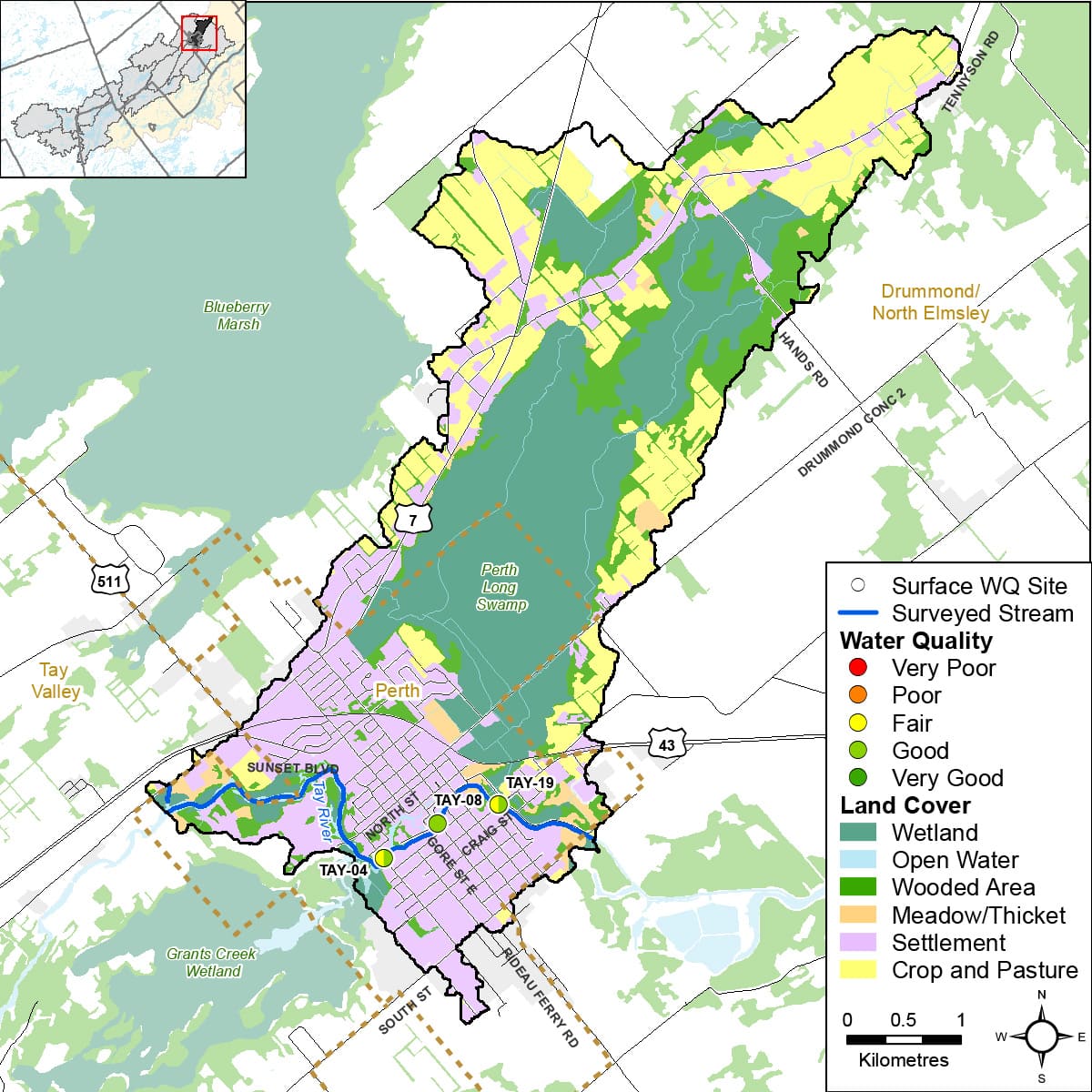 Three locations are monitored for water quality within the urban portion of the Town of Perth (Figure 2). The RVCA's water quality rating ranges from "Fair" to "Good" (Table 1) along the Tay River in the catchment, as determined by the Canadian Council of Ministers of the Environment (CCME) Water Quality Index.

A "Fair" rating indicates that water quality is usually protected but is occasionally threatened or impaired; conditions sometimes depart from natural or desirable levels.  "Good" indicates that only a minor degree of threat or impairment is observed and conditions rarely depart from natural or desirable levels. Each parameter is evaluated against established guidelines to determine water quality conditions. Those parameters that frequently exceed guidelines are presented below.

Data has been analyzed over the 2006-2017 period for general trends and conditions. Table 1 shows the overall rating for the monitored surface water quality sites within the catchment and Table 2 outlines the Water Quality Index (WQI) scores and their corresponding ratings. The scores at these sites are largely influenced by few high nutrient concentrations and bacterial counts. For more information on the CCME WQI, please see the Tay River Subwatershed Report.

Tables 3 and 4 summarize average nutrient concentrations at monitored sites within the Perth catchment and show the proportion of results that meet the guidelines.

TKN concentrations show that the bulk of results (65 percent) were also below the guideline (Figure 6, Table 4). The average concentration over the 2006-2017 period was 0.499 mg/l (Table 4); monthly averages increased from April to August, with lower concentrations observed in the fall months (Figure 5).  There was no significant trend found in TKN results at this site.

The majority of TKN results were below the guideline (Figure 5 and 6), 69 percent of samples were below 0.500 mg/l (TKN Guideline) with an average concentration of 0.462 mg/l (Table 4). Average monthly concentrations were comparable and also followed a similar pattern to TAY-04 (Figure 5). No significant trend was observed in the 2006-2017 TKN dataset. 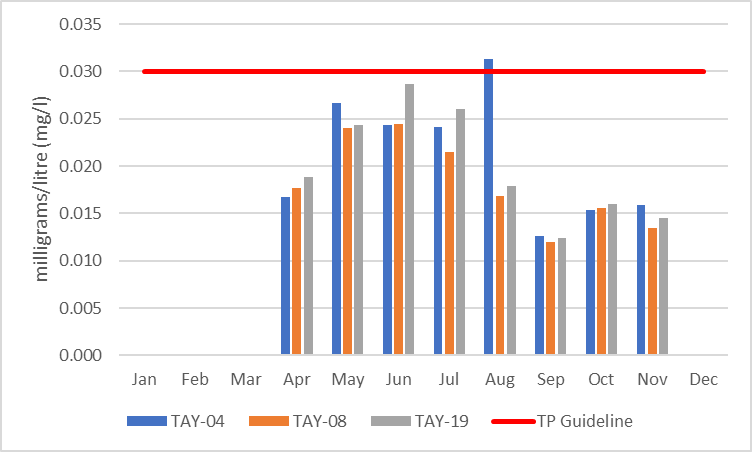 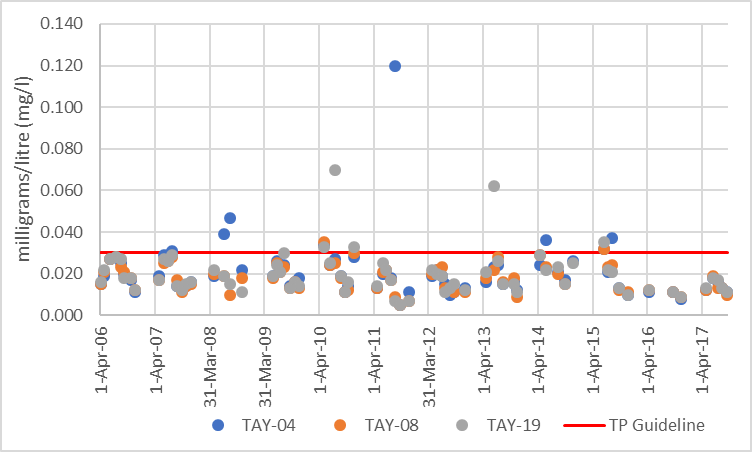 Figure 4 Distribution of total phosphorous concentrations in the Town of Perth catchment, 2006-2017 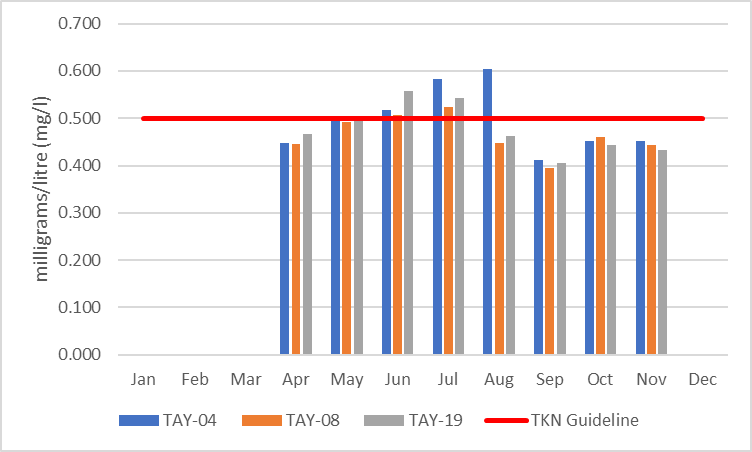 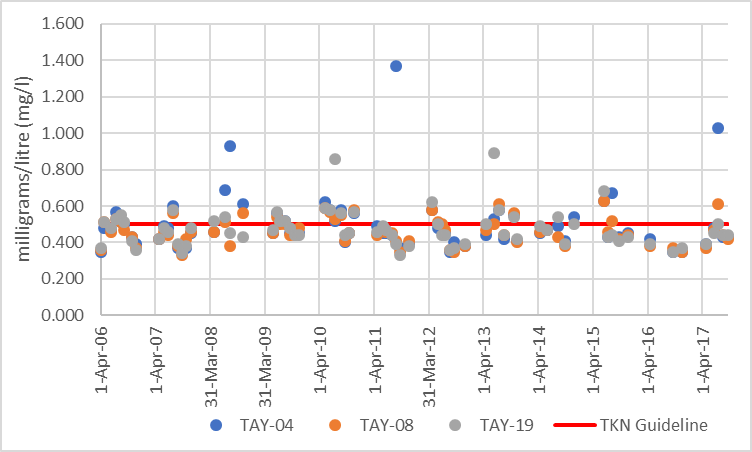 Figure 6 Distribution of total Kjeldahl nitrogen concentrations in the Town of Perth catchment, 2006-2017

The data collected in this catchment provides evidence that nutrient enrichment is not a significant concern in this reach of the Tay River.  Overall, the consistency in TP and TKN concentrations from TAY-04 to TAY-19 support that there is little nutrient enrichment as the Tay River flows through the Town of Perth. A declining trend in TP concentrations was also noted at all sites. This provides support that cumulative changes throughout the catchment has reduced nutrient concentrations. This should be taken as a positive sign as high nutrient concentrations can help stimulate the growth of algae blooms and other aquatic vegetation in a waterbody and deplete oxygen levels as the vegetation dies off. It is important to continue using best management practices that help prevent nutrient pollution in the Tay River; measures such as maintaining/upgrading municipal infrastructure (sanitary/stormwater sewers and water works), enhancing shoreline buffers, minimizing/discontinuing the use of fertilizers and restricting livestock access in upstream agricultural areas of the catchment.

Escherichia coli (E. coli) is used as an indicator of bacterial pollution from human or animal waste; in elevated concentrations it can pose a risk to human health. The PWQO of 100 colony forming units/100 milliliters (CFU/100 ml) is used. E. coli counts greater than this guideline indicate that bacterial contamination may be a problem within a waterbody.

Table 5 summarizes the geometric mean[3] for the monitored sites within the Town of Perth catchment and shows the proportion of samples that meet the E. coli guideline of 100 CFU/100 ml. The results of the geometric mean with respect to the guideline, are shown in Figures 7 and 8 respectively.

Elevated E. coli counts at site downstream site TAY-08 were also common. Fifty-one percent of samples were below the guideline (Figure 8) from 2006-2017 and the count at the geometric mean was 72 CFU/100ml (Table 5). The highest counts were recorded in June and August (Figure 7).  As with site TAY-09  there was no significant trend in E. coli data over the 2006-2017 period.

E. coli counts at site TAY-19 was comparable to those upstream (TAY-04 and TAY-08).  Forty-six percent of samples were below the guideline, with count of 86 CFU/100ml at the geometric mean (Table 5, Figure 8).  Monthly E. coli counts were above the guideline from June-September  (Figure 7). As with upstream sites, no trend was noted in E. coli counts over the 2006-2017 period. 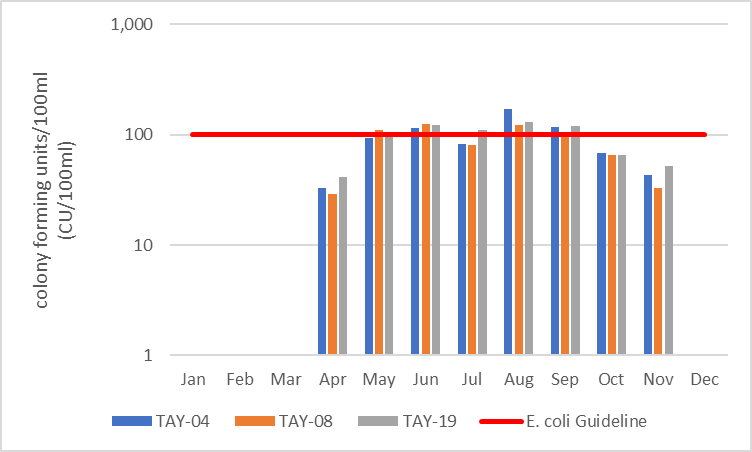 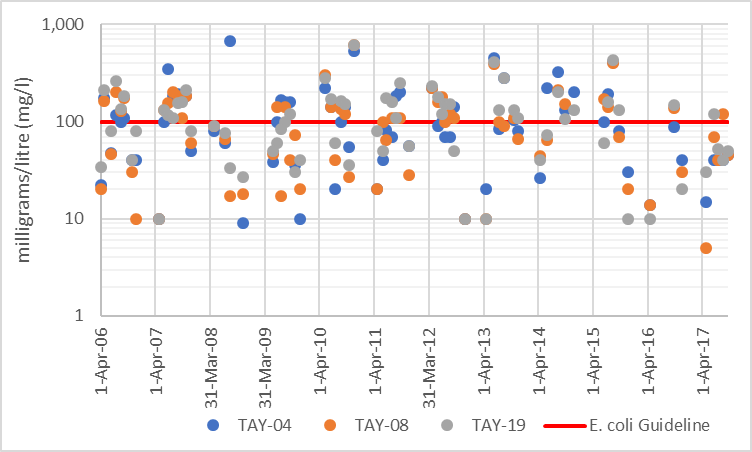 Given the frequency of samples that exceed the guidelines and counts approaching the guideline at all three sites, there is evidence that at times bacterial pollution is a concern within this reach of the Tay River. The data is comparable between all three sites thus does not provide sufficient information to; pinpoint possible sources of pollution; Minimizing runoff from infrastructure and roadways should be a priority in this catchment, such as ongoing efforts to improve storm water management within developed areas. Best management practices such as maintaining/enhancing municipal infrastructure, enhancing shoreline buffers, limiting livestock access and minimizing runoff in both agricultural and developed areas can help to protect this reach of the Tay River into the future.

3 Type of mean or average, which indicates the central tendency or typical value of a set of numbers by using the product of their values (as opposed to the arithmetic mean which uses their sum). It is often used to summarize a variable that varies over several orders of magnitude, such as E. coli counts.